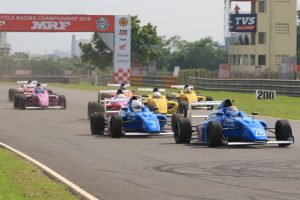 Frenchman Alessandro Ghiretti moved into the lead of the 2018 Formula 4 South East Asia standings at the Madras Circuit.

A week on from India’s first appearance on the F4 SEA schedule, where Ghiretti won two of the three races, the nine car grid reconvened with Ghiretti at the front once again. He took pole by almost three tenths from Malaysian Muizz Musyaffa, who narrowly outqualified Kane Shepherd, championship leader heading into the meeting.

Musyaffa attacked Ghiretti at the start of the first race, with Shepherd retaining third ahead of the battling Luke Thompson and Antoine Potty, who had started the other way round.

Potty fought back, overtaking Thompson and then attacking Shepherd. What would’ve been third place went amiss when contact was made with Shepherd’s right rear wheel and both cars took a trip through the grass. Musyaffa retired, meaning their battle then became for second, and Shepherd held on to the chequered flag by just a few tenths of a second.

Potty was found to have jumped the start though, and a 30-second penalty dropped him behind Thompson and Alister Yoong. Ryo Komikando was the last finisher in sixth.

Komikado started from the front for the reversed grid second race, but he had already succumbed the lead to third-placed starter Yoong by Turn 2.

The first lap ended with Potty and Thompson behind Yoong, and Komikando down in fifth. A lap later it was Shepherd who was in third, after Thompson and Ghiretti collided into each other.

Potty had been applying pressure to Yoong up front, but a single mistake immediately dropped him into the clutches of Shepherd, with Ghiretti joining the pair to go three-wide into Turn 9 and take second place. Ghiretti then chased Yoong, but could not find a way past the son of former Formula 1 driver Alex and the Malaysian took his first car racing win by 0.098 seconds.

Matching his best result of the season in third was Potty, comfortably ahead of Shepherd and Thompson. All nine drivers finished the race, although Musyaffa came home a lap down.

He turned his fortunes around in the final race, taking a dominant win over Ghiretti. Shepherd initially held second, with Ghiretti having to come from further down the grid. His low starting spot didn’t prove too much of a barrier as two spectacular moves brought him up to third by the end of the opening lap.

Shepherd and Ghiretti battled fiercely over second, allowing Musyaffa to break away up front to take his third victory of the season. Ghiretti finished as runner-up, ahead of Shepherd, Komikando and Potty.

Ghiretti leads the standings by 11 points over Shepherd at the halfway point of the season, with Musyaffa a clear third over Thompson and Potty.

How Euroformula Open plans to save F3 as we know it