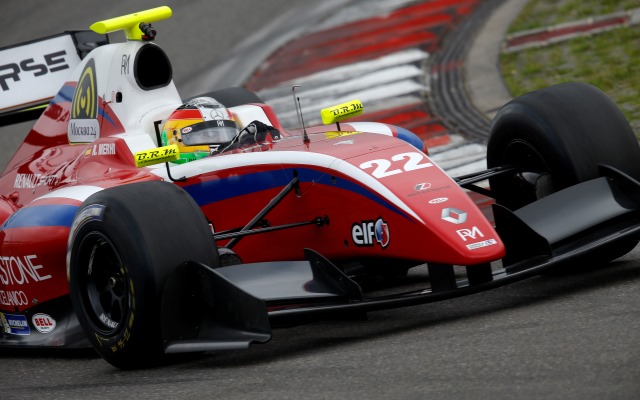 Roberto Merhi claimed his second Formula Renault 3.5 win in the space of three races as he won the second contest at the Nurburgring from pole position.

Merhi made a good start to keep the lead off the start while behind him, Carlos Sainz and Oliver Rowland collided.

Sainz had edged up into second off the line but as he turned into turn one, Rowland had to allow space for slow front row starter Oscar Tunjo on his inside, and there wasn’t enough room for all three. Sainz was hit around into the gravel, with Rowland and Tunjo also joining him in retirement.

There was further contact at the following corner, eliminating Beitske Visser and contributing to the appearance of the safety car.

At the restart, Merhi led from the Lotus duo of Matthieu Vaxiviere and Marlon Stockinger. While Stockinger pitted relatively early to defend his position from early stoppers behind him, Merhi and Vaxiviere went longer into the race, with the Frenchman doing a fine job of holding on to the Spaniard on his first weekend back after injuring his back in Monaco.

After they stopped on the same lap, Vaxiviere was only around 0.7 seconds behind the leader, but Merhi managed to extend the gap to 1.3 seconds by the finish.

Stockinger had to deal with pressure from Sergey Sirotkin after his stop but managed to keep the place and then put three seconds between himself and the Russian as the Filipino notched up his second podium of the season.

A lock up at the chicane put Sirotkin into the clutches of Amberg, but the Swiss driver was unable to capitalise and had to settle for fifth. Pietro Fantin was poised for sixth until his car stopped at the chicane near the end, promoting Norman Nato.

Will Stevens took seventh, just 0.2 seconds ahead of Pierre Gasly. After qualifying a disastrous 21st of 22 runners, Gasly managed to steer his way through the first-lap incidents and up into the top ten, but a strategy of getting his pitstop out of the way as early as possible only meant he spent the rest of the race up behind Stevens, salvaging a mere three points from his weekend.

Jazeman Jaafar and Will Buller completed the top ten, while series debutants Cameron Twynham and Alfonso Celis had strong runs to 11th and 12th.

Merhi’s win and the lack of points for the other leading contenders move the Zeta driver up into second in the standings, 39 points behind Sainz.