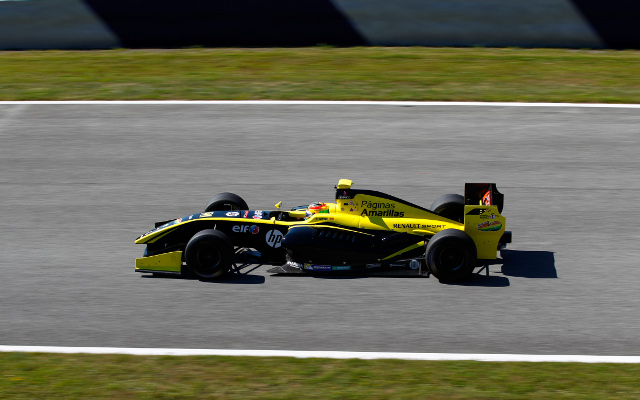 Manor Formula 1 racer Roberto Merhi has called time on his programme in the Formula Renault 3.5 Series, with GP2 veteran Rene Binder brought into the Pons line-up for the Nurburgring this weekend.

Spanish media reports earlier this week had suggested that Merhi would not be returning to his FR3.5 seat after missing Silverstone last weekend due to a clash with the Italian Grand Prix.

This has now been confirmed by Pons as they bring in Binder to join fellow new recruit Yu Kanamaru, who steps up from team manager Emilio de Villota’s Euroformula Open squad.

Also absent will be Merhi’s team-mate for most of the season Philopaz Armand, who previously had to miss the round in Austria due to visa issues.

After his last-minute deal to race in F1 for Manor this year, Merhi had remained committed to the FR3.5 campaign he had signed up for with Pons and the team’s Spanish sponsors.

But after winning three times for Zeta Corse last year, the move proved difficult, as Merhi managed a best finish of ninth from his first two weekends at Aragon and Spa.

He then scored a second-place finish at the Hungaroring, but his Spielberg round was marred by a collision with another car at the finish line of race one, causing him to be excluded from the event, which may prove to be his last in the category.

Binder joins Pons having switched GP2 teams in the last few weeks, missing Spa due to an infection and then leaving Trident to race for MP Motorsport at Monza, and promptly scoring his first points finishes of the season.

?For Pons Racing, having the chance to count on Binder is a privilege, no doubt on that,” said de Villota.

“Rene has been racing in the GP2 Series for the last three and a half years and I think he’ll provide us with the experience we need to continue our progression. I can’t wait to work with him at a challenging track like the Nurburgring this weekend.”

Kanamaru and Binder will be the sixth and seventh drivers Pons have used this year; Merhi was replaced by Alex Fontana in Monaco and by Will Bratt at Silverstone, while Armand’s place in Austria was taken by Meindert van Buuren.

One other chance to the FR3.5 line-up for the Nurburgring sees Marlon Stockinger back in the second Lotus car after focussing on his GP2 programme at Monza last weekend.