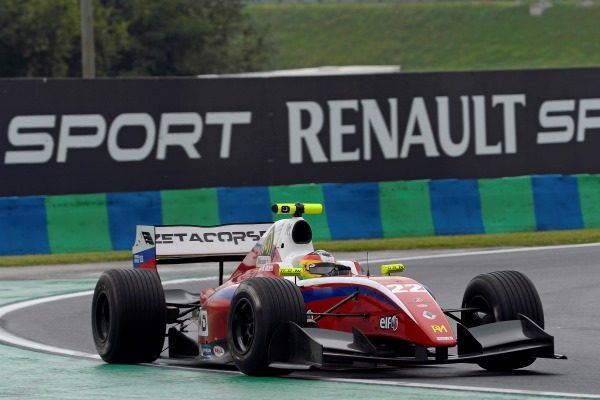 The first half of the session took place on wet tyres, before the entire field switched to slicks for the second half. A heavy crash for series debutant Esteban Ocon triggered a red flag with five minutes left on the clock, when Jazeman Jaafar had just taken top spot.

Sainz was the first to take advantage of the dryer track and claimed top spot, but was shuffled down to sixth as others improved, with Merhi the fastest. Sainz would return to P1 on his next lap, but was again bettered by Merhi and his own DAMS team-mate Norman Nato.

Those three would be the only ones to beat the chequered flag, and as none of the drivers behind them on track managed to better them, it became a three-way shootout for pole.

Sainz was the first across the line and again claimed top spot, with Nato this time slotting in behind him. Merhi, who has won three of the last four races, then returned to the top, beating Sainz by 0.362 seconds.

Behind the top three, Oliver Rowland was best, 2.4 seconds adrift of pole. Pons drivers Oscar Tunjo and Meindert van Buuren impressively locked out the third row of the grid, relegating Pierre Gasly down to seventh. Luca Ghiotto, Will Buller and Marco Sorensen completed the top ten, with the latter’s Tech 1 team-mate Nicholas Latifi 11th on his first weekend.

Improvements were such in the closing stages that Ocon – having had a best time deleted for causing the red flag – ended up 14 seconds off the pace but will almost certainly be allowed to start.