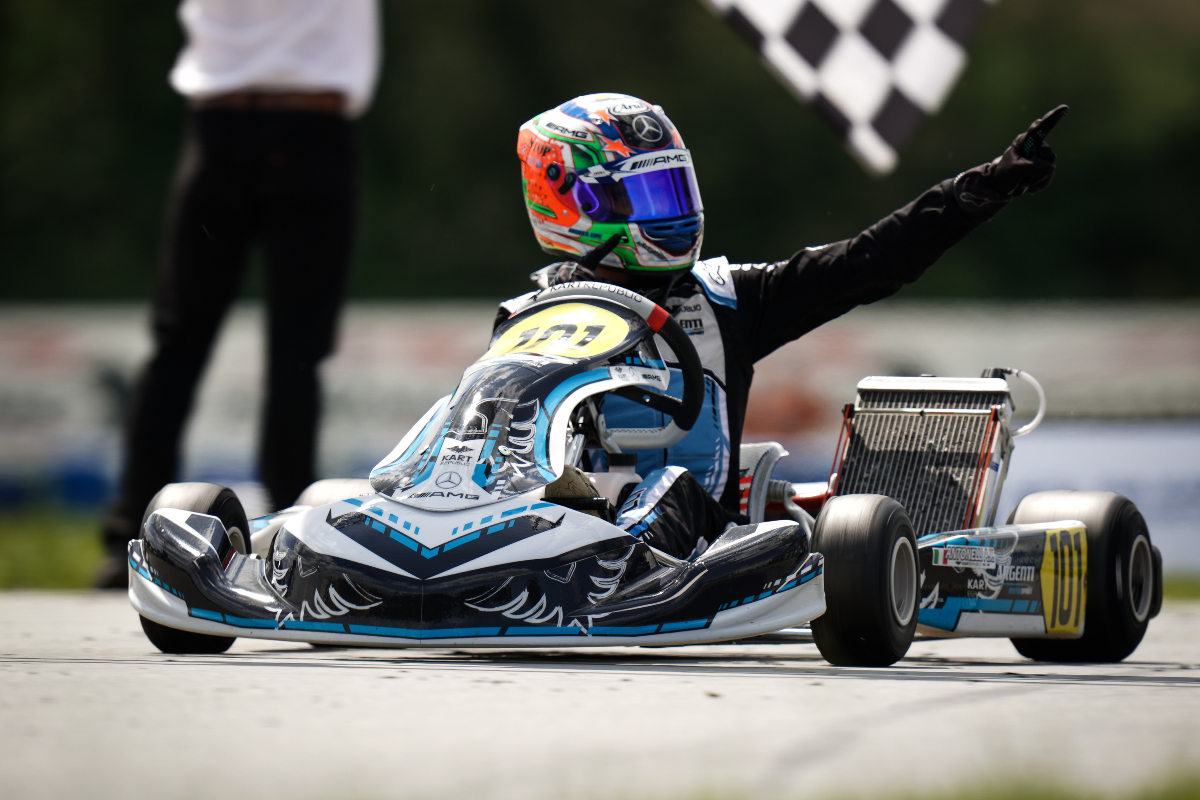 Antonelli has been one of the biggest stars of international karting over the last few years, winning three championships in OK Junior karts in 2019 and then stepping up to the senior OK machinery last year and becoming CIK-FIA European champion.

He’s currently third in this year’s European championship at the halfway point, having already come second in WSK’s Super Master Series and Champions Cup and seventh in the Euro Series in 2021.

The camp is a long-running fixture that invites drivers to test with the FDA. Across the world there are similar events and partnerships, and since 2020 they now combine for a global final where the winner becomes a Ferrari F1 junior.

Following the announcement of the quartet, and online speculation that Antonelli’s allegiances had changed, the Mercedes Junior Team’s driver development advisor Gwen Lagrue clarified that: “Kimi is one of our Mercedes young drivers, he has been invited by the Italian federation.”

Both have tested Formula 4 cars this year with AKM Motorsport, the team owned by Antonelli’s father and tied to the Kart Republic outfit.

“The youngsters will have five busy days, learning about all the different aspects of being a racing drivers, from physical preparation to motorsport theory, as well as how to manage stress,” read the FDA’s description of the 2021 camp.

“The camp ends with two days of driving on track at Fiorano when the four youngsters will drive a F4 car. Once again this year, the car will be fitted with tyres provided by Pirelli, a technical partner of the FDA for these scouting camps.”

Taponen, who like Antonelli was selected by Formula Scout as one of the world’s top karters in 2020, was runner-up in the CIK-FIA World Championship and third in the European Championship for OKJ karts last year.

He and Del Pino now race as Tony Kart team-mates in OK karts, and sit 20th and 21st in the European championship points. The rookie season has been far more fruitful for Taponen than Del Pino, as he’s currently third in the Champions of the Future series and has already notched up fourth places in the Champions Cup and and Super Master Series.

In addition to recruiting via the second edition of the FDA Scouting World Finals, which Antonelli may well reach, the FDA will also grant a place in its ranks to the winner of the FIA Women in Motorsport Commission’s Girls on Track Rising Stars programme this year subject to meeting an assessment standard.