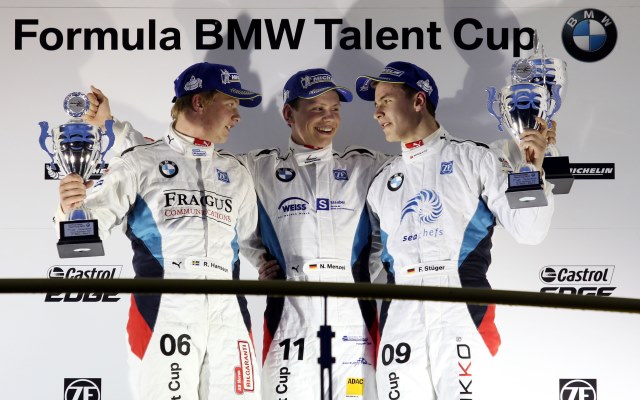 Nico Menzel took victory in race two of the Formula BMW Talent Cup final at Oschersleben ahead of race one victor Robin Hansson.

Menzel started second on the grid and initially slipped behind Jules Szymkowiak, but benefited when the Dutchman spun out trying to pass Hansson for the lead.

Menzel then chased down Hansson, passing the Swede on the penultimate lap. Hansson leads the points for the weekend on 43, but Menzel is only three behind going into the deciding race on Sunday morning.

?After finishing second in race one, I knew that I had more in me,” said At last, everything went to plan. Victory in the second race felt great. I can go into the third race without any pressure on me. It will definitely be an exciting ?Grand Final?.?

Florian Stuger completed the podium and sits third in the standings on 27 points. Michael Waldherr and David Droux finished close behind, with James Allen sixth and Bar Baruch seventh.

Picariello closes in on title with Slovakia Ring victory