written by Valentin Khorounzhiy 5 May 2014 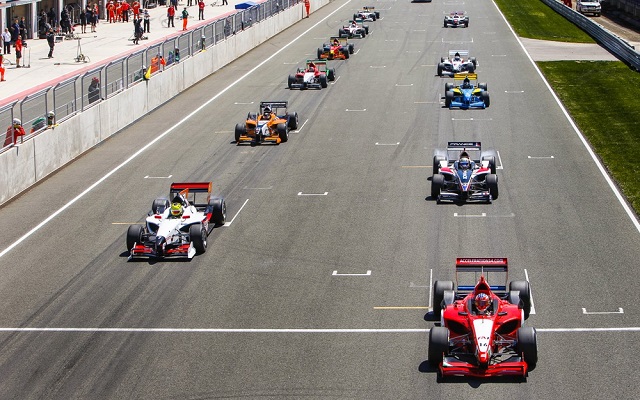 Having crossed the finish line for race two of Formula Acceleration’s round at Navarra in second, Nigel Melker was subsequently crowned winner when Mirko Bortolotti picked up a ten-second penalty.

Poleman Bortolotti got off to a great start for the race, leading the pack into turn one, while Melker was demoted to third by Venezuela’s Rodolfo Gonzalez, who got a superb getaway from seventh on the grid.

As the Italian pulled away, Gonzalez managed to hold Melker back until the first wave of mandatory stops, where the Dutchman managed to sneak ahead of the Venezuelan.

Bortolotti continued to set the pace out front, at one point leading Melker by 11 seconds, but would lose some time leading up to the second stop and managed to hold on to the lead by four seconds at the checkered flag.

However, his third victory would not stand for long, as he was handed a post-race penalty for his team allowing a detached wheel to roll in the pitlane during a stop. As such, the Italian was demoted to second, while Melker retroactively completed a Navarra double.

Gonzalez ran in third until three laps to go, but would retire due to a problem, allowing Germany’s Sebastian Balthasar to slot into the final podium position. Armando Parente and Luis Michael Dorrbecker rounded out the cars on the lead lap.

Picho Toledano was a lap down in sixth, with Swede Dennis Lind in seventh, having ran in fourth early in the race before his four visits to the pits ruled him out of contention. Oliver Campos-Hull was eighth with Gonzalez classified in ninth.