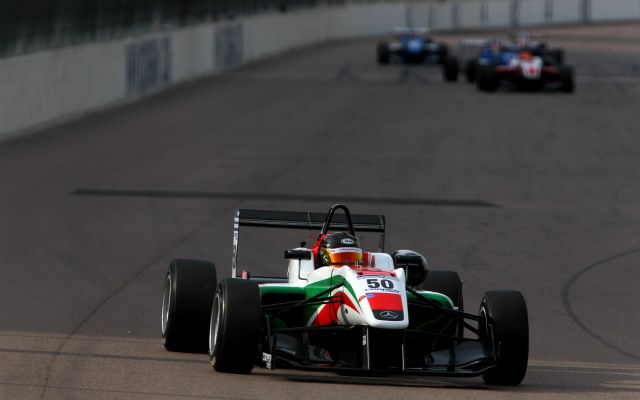 Sam MacLeod claimed a commanding victory in the opening race of the British F3 season at Rockingham.

After retaining the lead from pole position, the Fortec Motorsports driver – who will not contest the full season because of date clashes with the German series – built up an advantage of over five seconds before a safety car interruption on lap 10.

He was then able to reinstate a similar margin over the competition in the final nine green flag laps before taking the chequered flag.

“That was one of my easiest races so far in my career,” said the 19-year-old, who has made the step up to F3 after a single season of Protyre Formula Renault.

“I had a good start, pushed for a gap and then cruised. I had to restart after the safety car, but I was able to build the gap again. Tomorrow gives us the chance of a repeat. We have a reverse gird and older tyres to start, but I’m confident we can do well again in both races.”

Team-mate Matt Rao challenged MacLeod for the lead at the start but an error caused him to drop to the back of the pack. Rao’s strong pace allowed him to catch back up with the field, but on lap 10 he tangled with Chinese Carlin driver Peter Li, putting both out of the race and triggering the safety car period.

Chang’s team-mate Camren Kaminsky fell to the back of the pack with an error on lap four, but after gaining two places from the Rao-Li collision and using the safety car to catch up the pack, the Formula Ford graduate was able to put a move on Alice Powell to claim fourth.

Powell had started from the back having missed the earlier qualifying session due to a trial for the Team GB skeleton squad, but gained three places up to fourth at the start. In the end, she found her Carlin F308 was unable to keep up the same pace as the F312s used by the other teams.

The top four finishers will be reversed for the first of the two races on Bank Holiday Monday, putting Kaminsky and Chang on the front row.