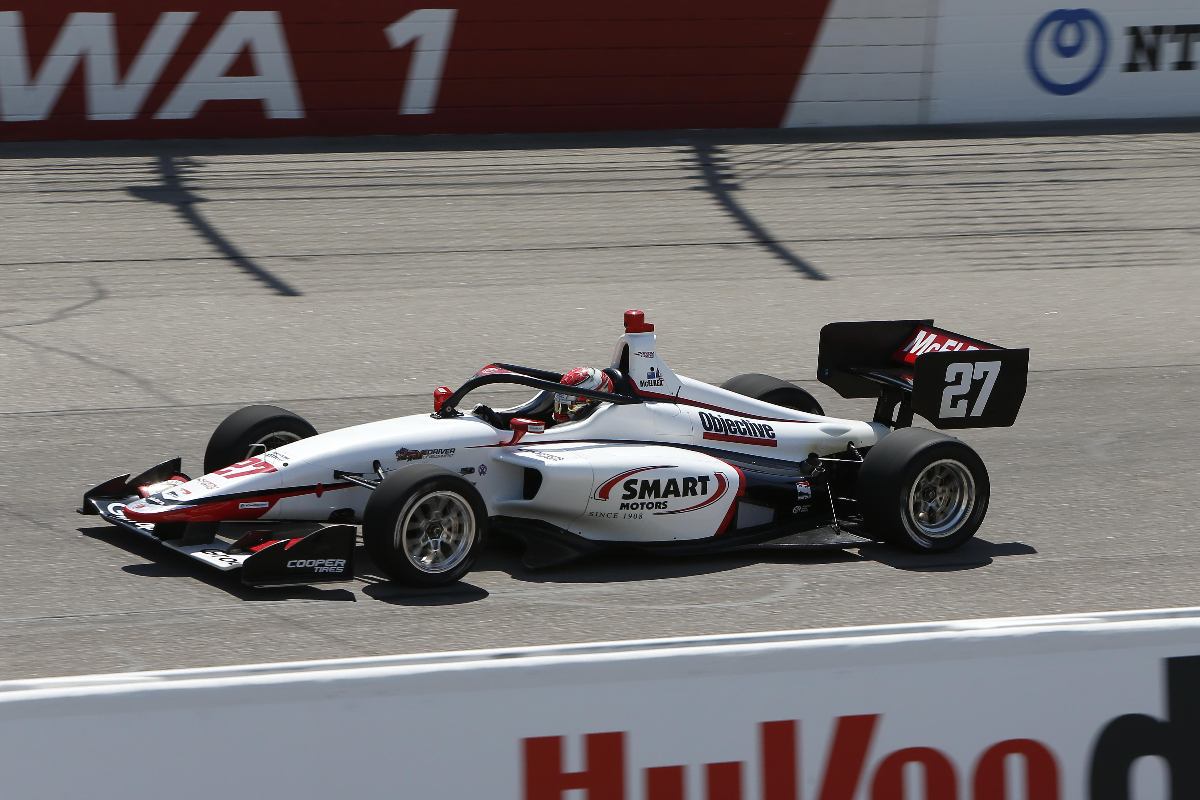 Hunter McElrea will start Indy Lights’ first oval race of the year from pole after setting the highest average speed in qualifying at Iowa Speedway.

A two-lap qualifying format was used, with the drivers going out in reverse points order and their average speed from their two laps setting the grid.

HMD Motorsports’ new signing Kyffin Simpson was first out, then James Roe Jr of the TJ Speed team he has recently left. Both were bettered by HMD’s Christian Bogle, then Force Indy’s sole entrant Ernie Francis Jr slotted into second on his and the team’s first ever attempt at oval qualifying in the series.

Next to run was Jacob Abel, and a consistent run where was faster on his first lap put him ahead on 158.470mph.

Antonio Serravalle followed and was only faster than Roe, and the pace then improved as HMD’s Danial Frost took to the track and set the fastest lap of anyone at that point at 158.914mph.

A 158.465mph second effort comfortably put him on provisional pole with a 158.690mph average, which Andretti Autosport’s Christian Rasmussen came just short of with his laps.

Benjamin Pedersen was slow on both of his laps and would ultimately qualify ninth, and the driver after him was McElrea. He punched in a 159.588mph lap straight away, and his equally rapid 159.418mph follow-up put him way clear as the only driver to lap in the 1m59s.

His Andretti team-mate Matthew Brabham looked slow on both of his laps, although did go faster on his second one, and put himself a lowly eighth on the grid. However with drivers required to race with the same set-up they use in qualifying, he said his car was set up solely for the race.

Sting Ray Robb joined McElrea in the 159mph territory with his first lap on track, but he couldn’t keep the pace up and a 158.971mph second lap gave him a 159.033mph average that was good enough for the front row but only until HMD’s points leader Linus Lundqvist headed out.

On the most rubbered-in track, he posted a 159.405mph lap as his first attempt, and didn’t scrub off too much speed on the second. However his first effort was already not enough for pole, and he came 0.0417 seconds short of matching McElrea over the two laps.