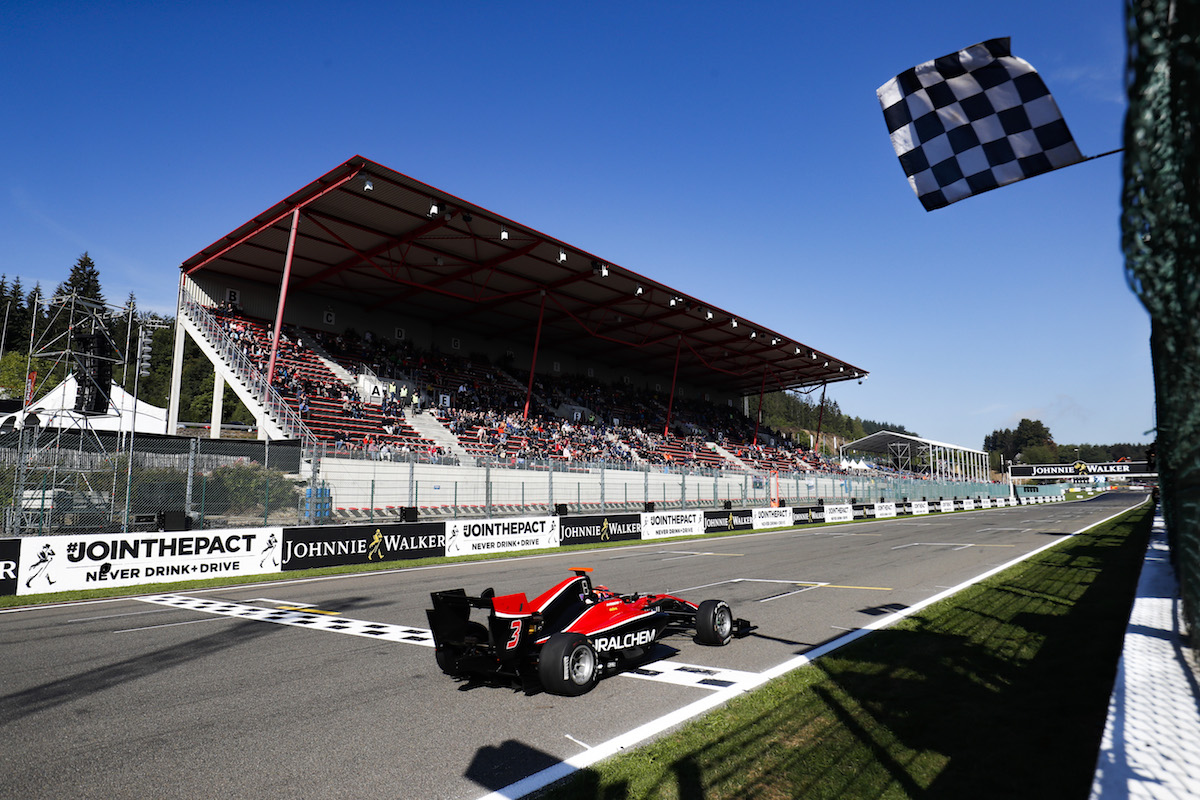 Nikita Mazepin took his third GP3 win at the head of an ART Grand Prix 1-2-3-4 in the second race at Spa, with Anthoine Hubert beating Callum Ilott to second to further increase his championship lead.

Mazepin started fourth and briefly slipped behind Pedro Piquet at the start as Arden’s Joey Mawson led from pole and Ilott jumped Jake Hughes for second off the line.

On the second lap, Ilott challenged Mawson for the lead on the outside going into Les Combes but the pair banged wheels and Ilott went off track.

That put him under immediate pressure from Hughes and Mazepin, who got past when Ilott slid wide exiting Bruxelles.

On the next lap, Hughes slipstreamed past Mawson for the lead down the Kemmel Straight and Mazepin followed him through under braking.

Mazepin then took the lead from Hughes on lap four, after which he was able to build a gap on the way to finishing 1.8 seconds clear.

As in race one, Hughes faded as the race went on, with Ilott and Hubert (who started sixth) passing him in quick succession.

It took Hubert three laps to catch and pass his chief title rival Ilott for second place, a move that extends his championship advantage over his team-mate to 26 points, with Mazepin a further seven behind.

Piquet and Giuliano Alesi finished fifth and sixth, while Richard Verschoor completed his debut weekend with a fine seventh place from 17th on the grid.

Ryan Tveter held on to the final point at the finish under pressure from Jenzer’s Tatiana Calderon and Juan Correa.

Mawson struggled for grip and fell through the field, eventually ending up 17th and last after an off at Fagnes before he retired to the pits.

Title outsider Leonardo Pulcini completed a weekend to forget, with his car slowing a few corners after he had taken sixth away from Mawson. Once the car was back in the pits, team boss Adrian Campos appeared to indicate that a discarded visor tear-off had caused it to shut down.