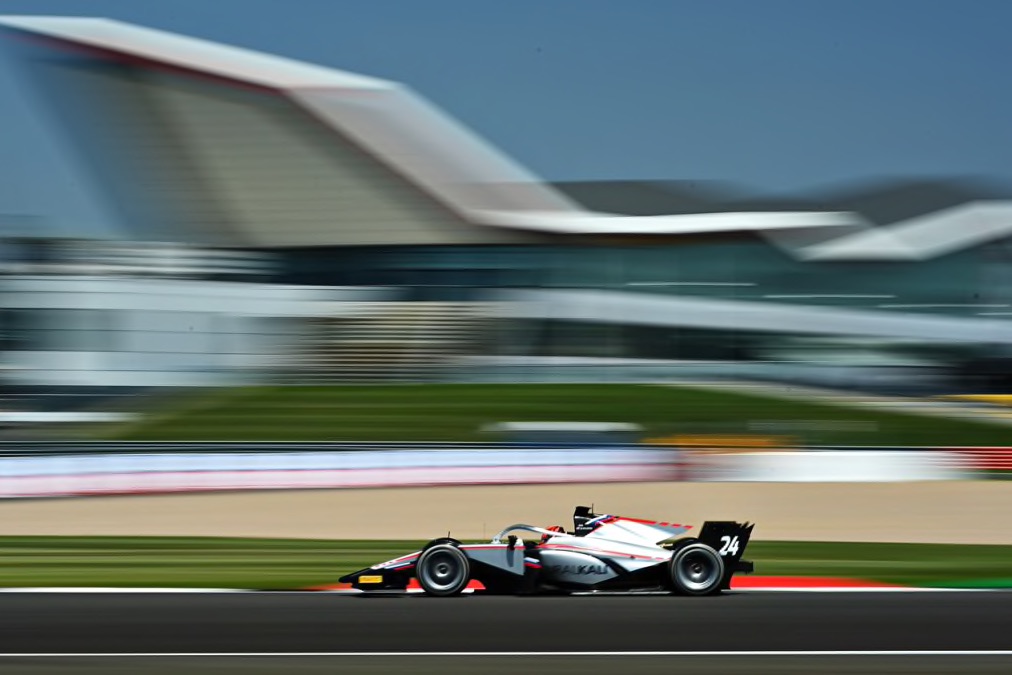 Nikita Mazepin stormed to his first Formula 2 win for local team Hitech in the Silverstone feature race, as Mick Schumacher faded from an early lead.

Callum Ilott meanwhile produced a fine comeback to fifth from the pitlane after failing to get away from the front row at the beginning of the formation lap.

After qualifying a series-best fifth on Friday, Mazepin passed Schumacher for the lead around the outside of Stowe on lap three of the race.

He opened up a lead of over two seconds before the top two pitted to switch from the medium to hard tyres at the end of lap eight.

Lundgaard, who ran third early on, pitted one lap later and rejoined side-by-side with Mazepin, but was demoted back behind Schumacher through the next two corners.

On lap 15, Lundgaard drove around the outside of Schumacher at Luffield, but Mazepin was by then four seconds up the road and had stretched that advantage to six seconds with 10 laps to go.

Lundgaard would begin eating into that margin once more, but he soon had to switch his attention behind him.

After starting seventh, Zhou spent the middle of the race running in second place behind polesitter Felipe Drugovich, who fell to fourth on the first lap after he and MP Motorsport opted to start on the hard tyres.

Zhou rejoined in eighth when he pitted onto the medium tyres with eight laps left, but began his charge just over a lap later when he passed Virtuosi team-mate Ilott into Brooklands.

At the same time, not far up ahead, Schumacher was struggling to keep hold of third place, with Louis Deletraz passing him at the end of the lap.

Lundgaard’s exits from Chapel proved to be his downfall over the closing laps, with Zhou getting by for second place with two laps left and Tsunoda snatching third on the final tour for his second podium of the year.

After his pitlane start, Ilott had been one of the earliest drivers to change to hard tyres but made them last well to finish fifth, beating Deletraz who also stopped early out of ninth place.

Drugovich lost a lot of time around his pitstop, rejoining 12th before recovering to seventh, while Dan Ticktum took eighth and reversed-grid pole as another early pitter.

After performing best of all in the Hungaroring feature race, Prema struggled badly for pace and Schumacher fell to ninth in the end, just holding off Nobuharu Matsushita.

Team-mate Robert Shwartzman, winner of the previous two feature races, could only manage 14th on the alternate strategy. He still leads the championship however with a reduced margin of eight points over Ilott.