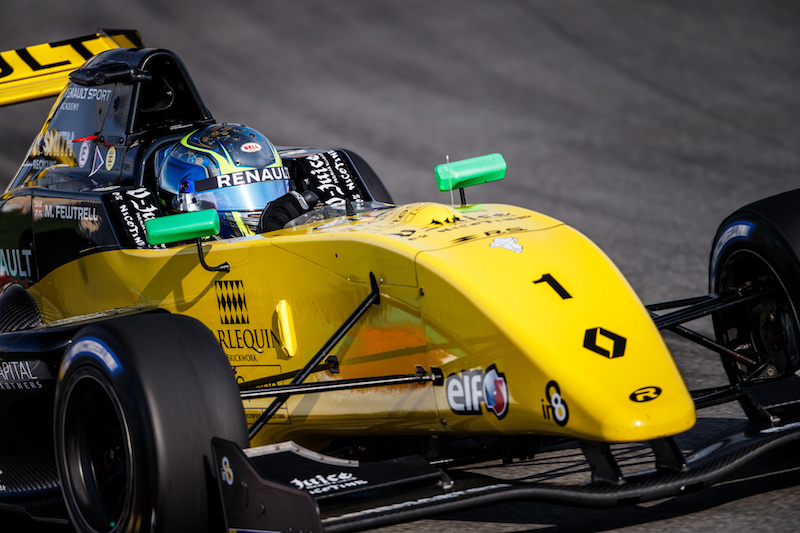 From second on the grid, Sargeant made a better getaway than team-mate Victor Martins to take the lead on the run down to the first corner, where Fewtrell held on to third despite a challenge on the outside from his fellow Renault Sport Academy-supported rival Christian Lundgaard.

With a 23.5-point lead over Lundgaard, Fewtrell simply had to finish the race inside the top nine to win the title, while his rival required victory.

The two swapped places at the start of lap four when Lundgaard went around the outside of Fewtrell at the first corner, but Fewtrell had a comfortable run to the chequered flag from there to seal his second outright title in car racing after his 2016 British F4 success.

Lundgaard quickly caught up to second-placed Martins, which allowed Sargeant to increase his lead from one to over three seconds as the American notched up the third win of his rookie campaign.

MP Motorsport driver Lundgaard was right with Martins at the halfway stage, and was eventually able to find his way past in the closing stages.

Like Lundgaard, Thomas Maxwell got ahead of his JD Motorsport team-mate Lorenzo Colombo at the start, and although he lacked the pace to keep up with the front four, he did manage to stay ahead of Colombo, even though the pair went side-by-side into Turn 1 at one-third distance.

Red Bull junior Neil Verhagen finished off an improved end to the season with his second seventh-place finish of the weekend, despite going off at the final chicane on the penultimate lap.

As in race one, Verhagen just held off former championship challenger Yifei Ye, who passed both Eliseo Martinez and Charles Milesi after starting 10th.