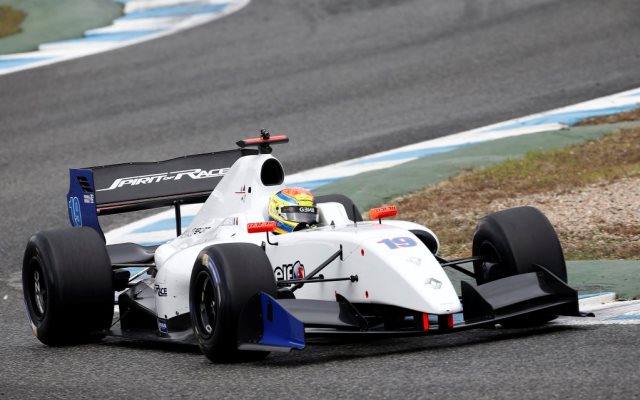 Matthieu Vaxiviere set the pace in the morning session on day two of Formula 3.5 V8 testing at Jerez with the new Spirit of Race team.

Series runner-up Vaxiviere set his time of 1m27.331s inside the first hour of running and then sat out most of the remaining two and a half hours.

Wednesday pace-setter Yu Kanamaru finished up second, exactly three tenths down on the Frenchman. His Pons team-mate Matevos Isaakyan was 0.02s back in third.

Jake Hughes was fourth for Strakka ahead of Fortec tester Louis Deletraz. Next were the AVF pairing of GP3 team-mates Marvin Kirchhofer and Alfonso Celis, split by 13 thousandths of a second.

There were two more team-mates even closer behind that, with Arden’s Egor Orudzhev and Jack Aitken separated by a mere 0.001s.

George Russell completed the top 10 having switched from Tech 1 to Strakka in place of Gustav Malja, who replaced Aitken at Fortec.