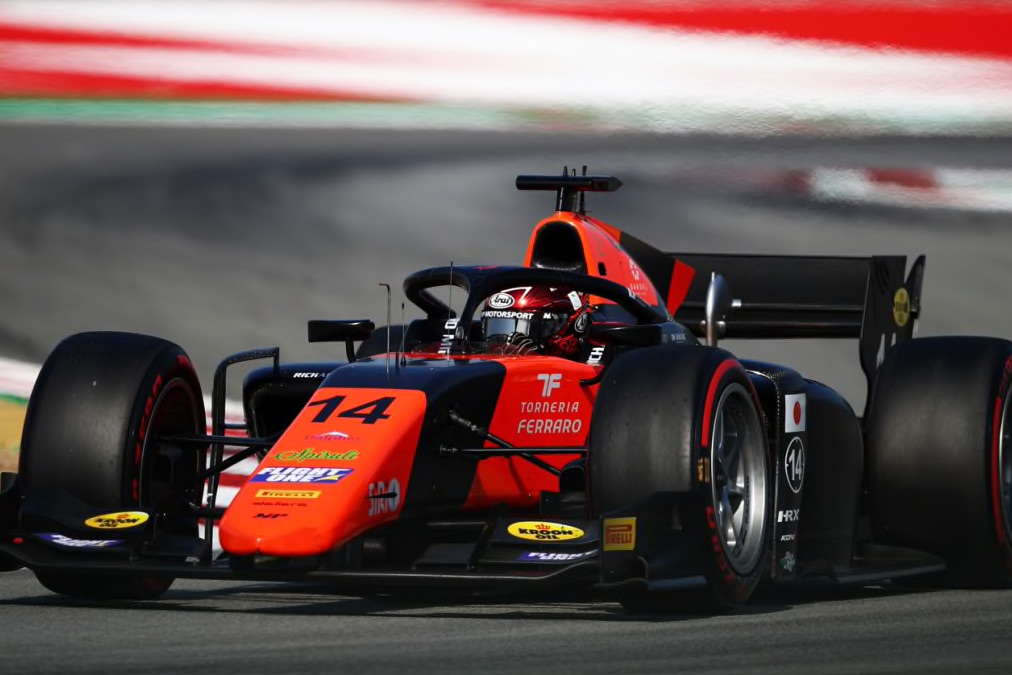 Nobuharu Matsushita took an unlikely Formula 2 feature race win from 18th on the grid at Barcelona thanks to some late safety cars.

Championship leader Callum Ilott had looked serenely on his way to another win, recovering well after being jumped by fellow front-row starter Robert Shwartzman at the start.

Ferrari juniors Shwartzman, Ilott and Mick Schumacher headed into the first corner three-wide after the latter had made a good launch from fifth on the grid on the hard tyre.

Somehow they escaped any major contact, with Shwartzman leading Ilott under an early safety car after their fellow Ferrari protege Marcus Armstrong slid off into the Turn 4 gravel trap.

After Shwartzman began to struggle on the soft compound tyres, Ilott went past him using the Drag Reduction System on lap eight. Shwartzman pitted at the end of the lap, and when Ilott pitted one lap later he rejoined in front.

At that stage, Ilott was over 30 seconds behind Schumacher but showed incredible pace on the hard tyres. By the time Schumacher pitted on lap 23, Ilott was already within 3s of him, and reclaimed the lead from Nikita Mazepin down the pit straight.

Shwartzman meanwhile had struggled to clear traffic as effectively – especially Matsushita – and was passed by Felipe Drugovich, who had made his soft tyres last to lap 12.

When Sean Gelael and Giuliano Alesi tangled at Turn 10 and the latter was left stranded on the kerbs, the safety car came out with 12 of the scheduled 37 laps remaining.

Ilott pitted for another set of soft tyres, while Mazepin and Matsushita behind both made their first stops. Matsushita crucially jumped ahead of Mazepin in the process.

With MP Motorsport focused on servicing Matsushita, Drugovich continued and took the lead before pitting a lap later, rejoining in ninth.

Carlin meanwhile kept Yuki Tsunoda out front on his hard tyres, and he managed to keep Ilott behind when the race restarted at the end of lap 28. Ilott got alongside on the inside a lap later, but couldn’t overtake without DRS assistance.

That left Ilott vulnerable to Matsushita, who went around his outside at Turn 4. Ilott continued to fight him until forced wide at Turn 7, with Matsushita securing the place and helping Shwartzman to also get past Ilott.

On lap 32, Matsushita used DRS to breeze past Tsunoda into Turn 1, with Shwartzman following him through.

Then, just in front of the pack, Roy Nissany slid into the Turn 3 barriers just after a lengthy pitstop for a new front wing.

The safety car returned with less than five minutes remaining, and the restart preceded a single-lap shootout.

Matsushita held on to win – having previously finished no higher than seventh this year since moving from Carlin along with engineer Daniele Rossi over the winter.

Shwartzman took second to boost his title hopes, with Ilott getting completely mugged on the last lap and crossed the line sixth.

Both Mazepin and Guanyu Zhou overtook Ilott and then Tsunoda to finish third and fourth, but Mazepin was given a five-second penalty for not following the correct rejoin procedure at Turn 1 when he went side-by-side with Matsushita earlier on.

That relegated Mazepin to 13th and put Zhou back where he started the race in third, while Tsunoda just kept Ilott and Schumacher at bay for fourth. Drugovich was seventh, with eighth place and sprint race pole – from 20th on the grid – going to Luca Ghiotto.

Christian Lundgaard, second in the championship prior to the race, dropped towards the back on the first lap and just missed out on the points behind Dan Ticktum and Louis Deletraz.