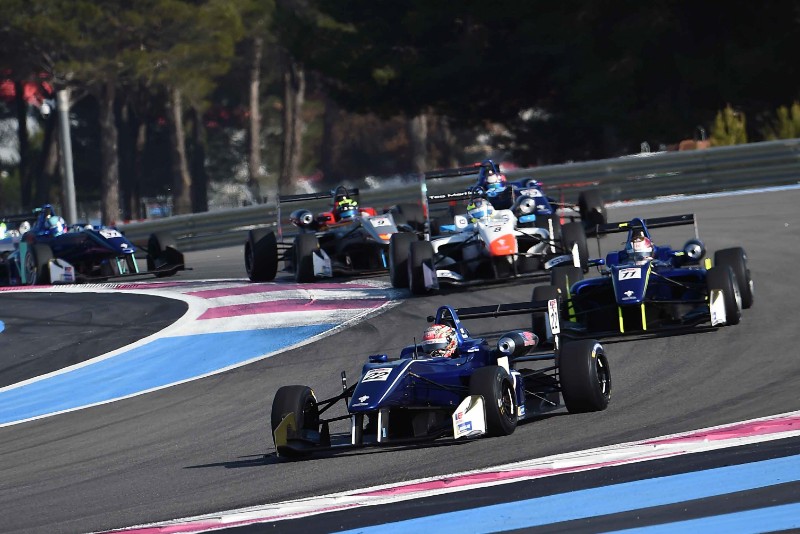 Nobuharu Matsushita and Linus Lundqvist were the two winners of the Euroformula Open Winter Series races at Paul Ricard on Saturday.

Carlin driver Matsushita was taking part in the non-championship event to gain experience of Paul Ricard ahead of the Formula 2 round being held at the track this year, and only contested the first race.

He started said race from pole, and despite a poor start took a dominant 8.448 second victory over team-mate Christian Hahn. With Matsushita’s fellow Honda junior Teppei Natori finishing third it meant Carlin had a podium lockout.

Natori had to handle pressure from Teo Martin Motorsport’s Lukas Dunner for much of the race, until the Austrian had fourth place nabbed from him by BRDC British Formula 3 champion Lundqvist in a late battle. It was Natori’s first race in a F3 car, meaning he won the rookie classification.

Lundqvist and Dunner battled again in the second race, with Dunner leading for 10 of the 14 laps until the Swede forced Dunner into a mistake and took the lead. A few more mistakes meant Dunner was quickly shuffled down to fourth, with Hahn and Natori completing the podium once again.

Nicolai Kjaergaard and Billy Monger, Carlin’s two other drivers, had mixed weekends. After breaking his front wing on the opening lap Kjaergaard finished a lapped ninth in race one, and despite being the fastest driver could only manage fifth in race two.

The anticipation around Monger’s EF Open debut was quelled by a host of clutch issues that meant he retired in the first race and finished a distant eighth in the second.

Partnering Lundqvist at Campos was Alessio Deledda; the team’s surprise signing for the new FIA F3 Championship. Unsurprisingly the Italian was off the pace, and finished a minute off the winner both times.