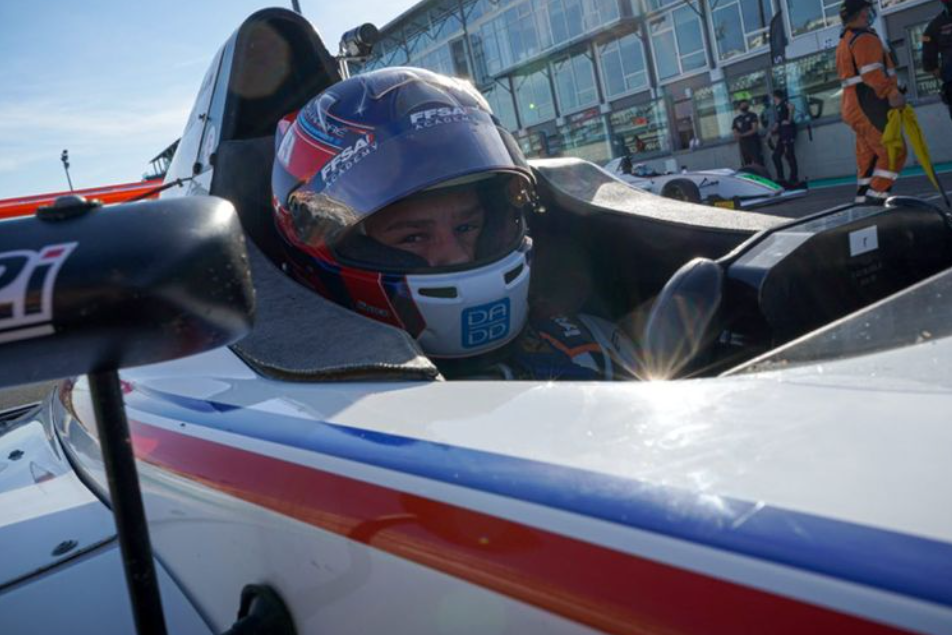 Esteban Masson took a commanding second victory of the weekend in the third French Formula 4 race at Magny-Cours.

The poleman got a strong start and simply scampered away into the distance, opening a seven-second lead as the rest of the field scrapped behind throughout the 20-minute race.

Owen Tangavelou initially held second but his pace was not strong and found himself under pressure from Hugh Barter early on. The Australian driver got past but had no answer for Masson in front.

At the flag, Masson, who had eased slightly, won by just under six seconds.

Tangavelou had resisted late pressure from Maceo Capietto to round out the podium on the road, before being dropped back five seconds for cutting the final chicane and gaining an advantage. This elevated Capietto to the podium, and dropped Tangavelou down to fourth.

Daniel Ligier held fourth early on, but a huge lock-up into the fast Estoril curve hampered him significantly. He finished fifth.

The midfield scrap was frantic throughout. Alessandro Giusti started third but had a miserable start, dropping towards the lower reaches of the top 10.

He was able to come out on top of this tense battle to recover to take sixth and French F4 Junior victory ahead of Dario Cabanelas – who had a noted collision with Pierre-Alexandre Provost at the Adelaide hairpin.

Noah Andy, Adam Szydlowski and Provost rounded out the top 10. Andy had climbed several places and had overtaken Ligier for fifth but spun off shortly after.

Julien Gael was firmly in that scrap for sixth but had contact that damaged his front wing and dropped him to the back of the field.

Aiden Neate was another driver to hit woes, after contact with Enzo Geraci. That incident is under investigation.