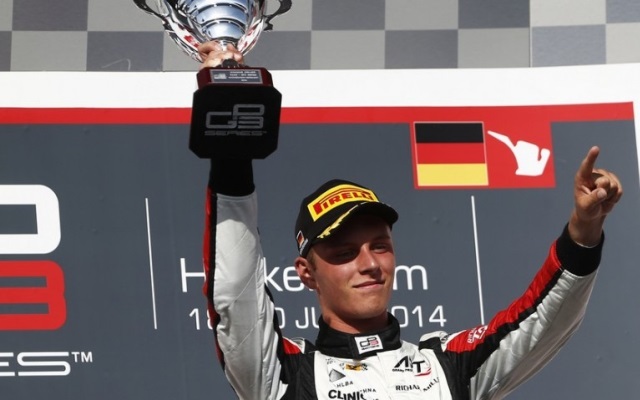 Marvin Kirchhofer will combine racing in both GP3 and FIA F3 European Championship in the 2015 season, having had a second year in the former confirmed.

The German star talent will stick with ART Grand Prix, the team he spent his rookie season in the series with.

He then moved on to German F3 where his performance was even more impressive, with twelve victories and 24 podiums out of 25 races.

Being labelled as the next German wonderkid, he entered GP3 with ART Grand Prix last year, which he finished in third, stepping on the podium seven times including an impressive win at Hockenheim.

Kirchhofer will stick with the French squad for his sophomore campaign in GP3, while he will also participate in FIA F3 with EuroInternational.

?I’m really happy that I will be racing with ART Grand Prix again this year,” said Kirchhofer.

“The targets are quite clear for this season and I’m really looking forward to it. I’m very proud to be a part of the team again and I’m quite confident that we can do something good this year, as we have already shown some good performances together last year.?

ART team manager Sebastien Philippe added: ?ART Grand Prix is proud to continue the adventure with Marvin in GP3. He is a quick and complete driver who has thrilled the team with his talent and personality.

“In view of the results from last year, the goal will be to win the title in 2015 and regularly target pole position and victory. Marvin has all the capabilities to do this, and after a first probative season he now has the necessary experience.”

Kirchhofer is the second revealed driver of ART’s GP3 line-up. He will join Mexican Alfonso Celis in the team, and the third seat is strongly tipped to be taken by FIA F3 champion Esteban Ocon.