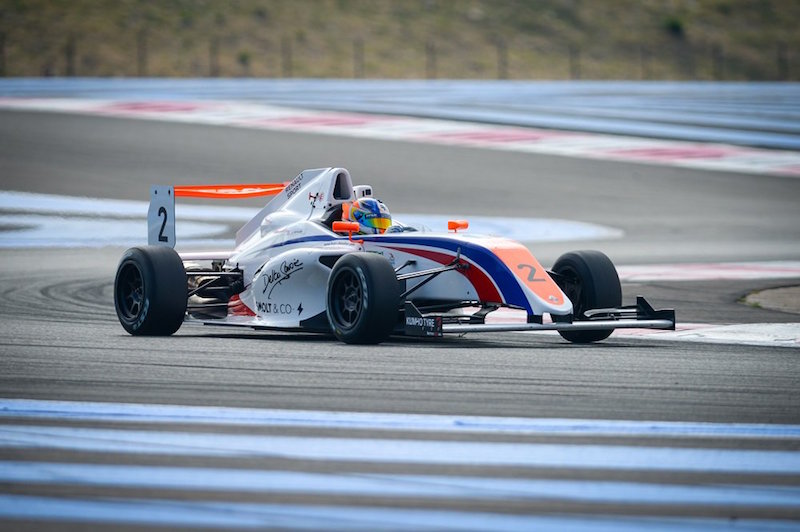 Victor Martins lost the lead of the French Formula 4 title fight in race one of the Paul Ricard finale when a last-lap bid to snatch the win from Hugo Chevalier caused him to spin.

Martins led rival Arthur Rougier by five points coming into the deciding round, and was on course to extend that after holding second place to Chevalier.

From his maiden pole position, Chevalier led by nearly two seconds after the opening two laps, but come halfway through the 20-minute encounter, Martins had cut the gap to a second.

Martins continued to close the gap, and as he went through the Signes right-hander at the end of the Mistral straight for the final time, he caught Chevalier and dived to the inside for Beausset.

As he went side-by-side however, Martins lost the rear of his car, banged wheels with Chevalier and then spun to a stop in the run-off area.

The lead fight had a six-second advantage over third-placed Rougier going on the final lap, but in the time it took Martins to get going again from his spin, he fell to seventh.

Although Martins gained a point for the fastest lap, Rougier’s second place moves him back into the championship lead with an advantage of eight points (as Chevalier is ineligible for points this weekend).

Martins will get to start fourth on the reversed-grid for race two with Rougier ninth, and in race three based upon qualifying he’ll start second with Rougier fourth.

Starting from the same position in the opener, Rougier fell to fifth behind Pierre-Alexandre Jean on lap three of the race, but he later fought back with a pass on the outside into the Mistral chicane.

He then pulled a similar move on Florian Venturi a lap later to take what would become second when Martins spun.

Charles Milesi followed Rougier past Jean, but he would lose out late on to both Jean and Ugo de Wilde, who came through to finish fourth.