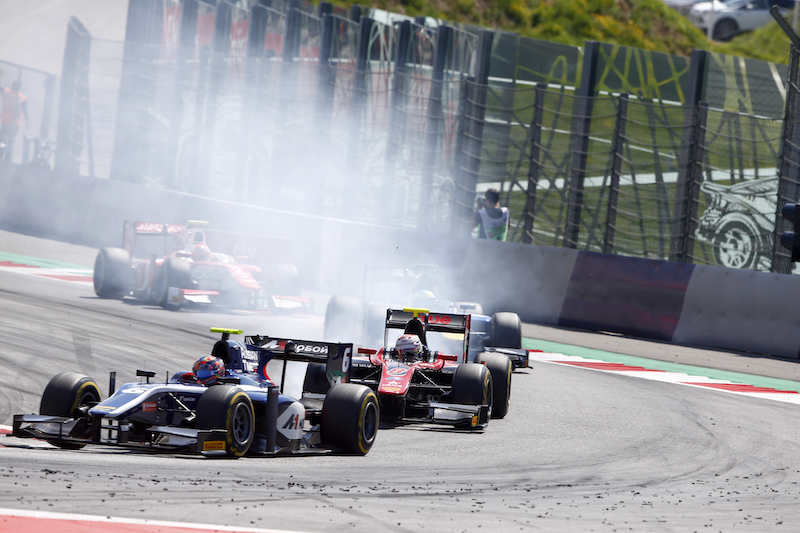 Artem Markelov took a lights-to-flag win in the Formula 2 sprint race at the Red Bull Ring, while his Russian Time team-mate Luca Ghiotto also starred by storming from 14th to fourth.

From reverse-grid pole, Markelov kept the lead at the start as Ralph Boschung got away very slowly from second – with most of the field missing him before back-row starter Raffaele Marciello ploughed into the back of him, triggering a safety car.

After the restart, and a subsequent virtual safety car, Markelov opened up an advantage as large as three seconds over the opposition, before cruising home 1.4s clear for his second win of the year.

Alex Albon and Oliver Rowland made good starts from fourth and fifth on the grid to climb to second and third, and had a close battle over the remainder of the race, with Albon holding on to stand on the second step of his maiden F2 podium.

Rowland had come under pressure from Antonio Fuoco after the safety car restart, and as he defended the position on the exit of Turn 4, Fuoco was forced to slow to avoid being forced into the gravel trap on the outside.

This caught out the chasing championship leader Charles Leclerc, whose front-left wheel made contact with Fuoco’s rear-right and was sent into a spin, unable to restart and causing the virtual safety car.

Fuoco was able to continue unharmed but he lost fourth place with four of the 28 laps to go to the charging Ghiotto.

Ghiotto’s charge was not without contact. After the VSC he capitalised on a battle between Gustav Malja and Nyck de Vries over eighth to pass de Vries and get alongside Malja on the run to Turn 4.

De Vries came back however and dived inside both under braking, and Ghiotto and Malja made contact on his outside that caused the Swede to head into the gravel.

Arden driver Nato benefited when de Vries and Robert Visoiu collided in front of him over eighth place at Turn 4, with Visoiu braking late but forced up onto the grass on the inside when de Vries refused to open the door for him.

Nobuharu Matsushita was side-by-side with Fuoco over fourth at the first corner of the race when contact forced him wide, and he trailed home 14th of the 15 finishers, ahead only of the delayed Malja.