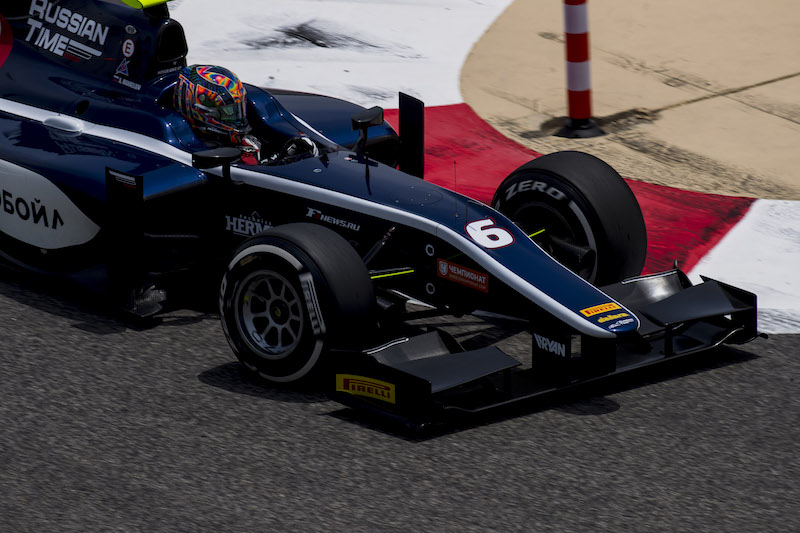 Russian Time’s Artem Markelov perfected a one-stop strategy to win the first feature race of the 2017 Formula 2 season from seventh on the grid in Bahrain.

The Russian driver made his medium tyres last two and three laps longer than Norman Nato and Charles Leclerc respectively to give him supreme grip and lap time at the end of the 32-lap race.

Markelov moved up to third at the beginning of the race, passing Rapax’s Nyck de Vries around the outside of Turn 1, to sit behind then-leader Leclerc and Nato.

Despite being 8.6s behind Nato after his pit stop on lap 18, he came back by lapping around 2.6s faster than his rivals, passing Leclerc at Turn 16 on Lap 29 and passing Nato two laps later. He extended the gap to a massive 7.8s at the end of the race.

Nato finished ahead of Leclerc in second after passing the Monegasque driver in a key move on Lap 16, passing around the outside at Turn 4.

MP Motorsport’s Jordan King came from 11th?on the grid to finish fourth after passing DAMS’ Oliver Rowland on the final lap. King managed to move side-by-side with Rowland with the use of DRS on the start-finish straight and into Turn 1 before Rowland had to back out.

ART Grand Prix’s Alexander Albon made a series of overtakes in his second stint to finish sixth ahead of Russian Time’s Luca Ghiotto. Albon’s team-mate Nobuharu Matsushita finished eighth to claim the first sprint race pole of the season.

Antonio Fuoco and Nyck de Vries completed the points after falling down the order during the race. The latter driver struggled for grip in his second stint, falling from fourth and being five seconds slower than the Italian on the final lap alone.

DAMS’ Nicholas Latifi finished outside of the points, having to make an early pit stop on Lap 13 after damaging the left-hand side of his front wing against the rear of Albon on the previous lap when fighting for the final points-scoring position.

Arden’s Sean Gelael had a difficult race after starting from the pitlane, finishing 17th, after picking up two penalties for speeding in the pitlane. The Indonesian was first penalised after speeding on his one and only stop for tyres before then speeding while completing a drive-through penalty. A five-second penalty was added on to his time.

Racing Engineering’s Louis Deletraz finished last of the 20 drivers after his race was ruined from stalling on the grid at the start.