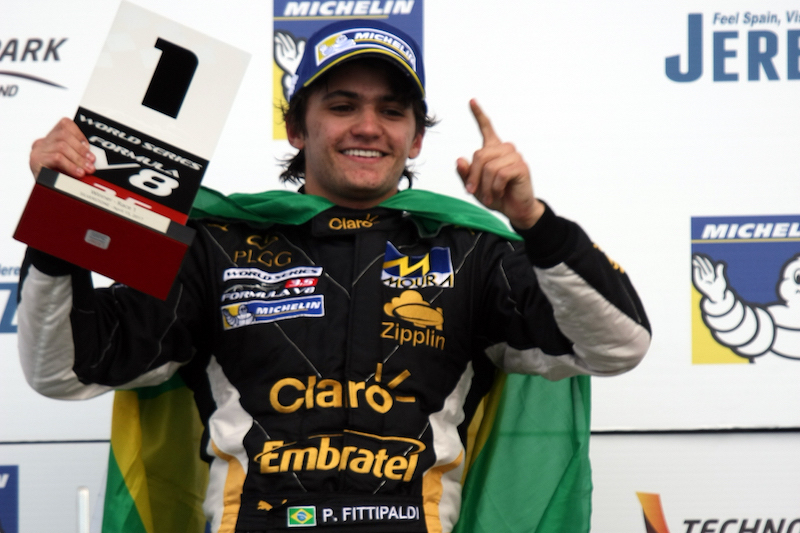 He created a gap up front straight away, putting almost two and a half seconds between himself and Orudzhev by lap three. Three laps after that he looked certain to win as his lead was up to 6.5 seconds.

However the gap started to come down, and approaching three quarter distance strange sounds could be heard from the rear of Fittipaldi?s car. Orudzhev was closing in by about half a second a lap, and it looked like he was going to overtake the Brazilian before the finish.

Fittipaldi held on though, crossing the line for his first victory and the first for a Brazilian in a ‘Lotus’ in an international single-seater race since Ayrton Senna in the 1987 Detroit Grand Prix.

Celis, who had started fifth, was the fastest man on track in the second half of the race. It took a long time for him to get up the order, only taking fourth at three quarter distance and third on the penultimate lap. In the process he took fastest lap though, and matched his best finish from last season.

Isaakyan and Binder finished a distant fourth and fifth, with Damiano Fioravanti just holding off a spirited Nelson Mason to be the best rookie in sixth place. Fioravanti?s sixth place was also the first race finish for Il Barone Rampante since the 1993 International Formula 3000 season.

The one retirement of the race was RP Motorsport?s Roy Nissany, who ended his race after the first lap.