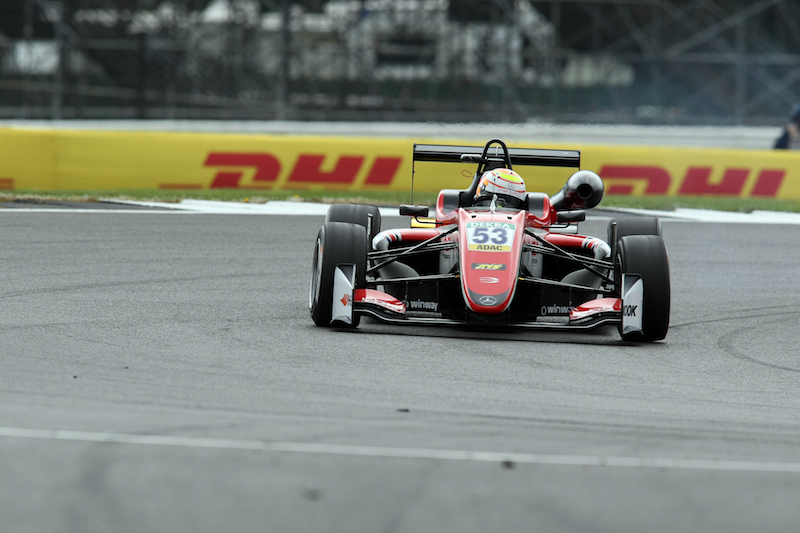 After a retirement and a second place, Prema’s Callum Ilott got?his first win?of the European Formula 3 season?in the third encounter at Silvertone.

Like in the second race he lost his pole advantage to Motopark?s Joel Eriksson at Brooklands on the opening lap, but this time did not let the Swede escape and made an assertive move around the outside of Stowe to reclaim the lead three laps later.

Once having done that he pulled away, leaving Eriksson to fend off race one winner Lando Norris. Norris had repeated his poor start from race two but was more effective in undoing the damage, moving back up to fourth by the end of the opening lap.

He also didn?t waste too much time getting past third placed Maximilian Gunther of Prema, with a thrilling move that started at Stowe and finished exiting the final corner. Once past he closed in on Eriksson, but could only get within a second by the end of the race.

VAR team-mates Joey Mawson and Harrison Newey continued their battles from the first two races to once again occupy the lower points places in eighth and ninth, with Ralf Aron finally hooking a decent race together to finish 10th.

It wasn?t an entirely clean race for him though, as he clashed with?Ferrari junior Guan Yu Zhou on the opening lap, leading to the race?s only retirement.

Prema team-mate Mick Schumacher had spun out just ahead of the Chinese driver at the preceding corner as he went side-by-side with Dennis.

Eriksson extends his championship lead, with Norris moving back into second place in the standings.