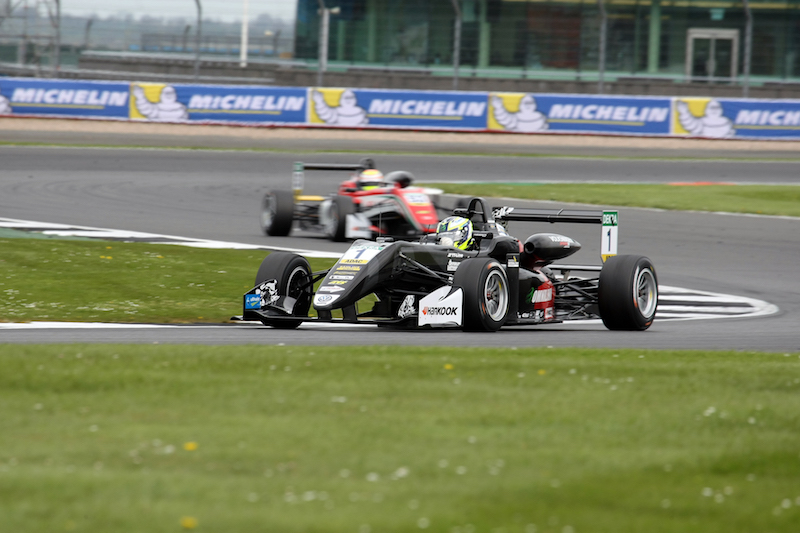 BMW junior Joel Eriksson prevailed in a thrilling second European Formula 3 race at Silverstone, with close battles throughout the grid behind him.

Eriksson made a strong start from third on the grid to challenge pole man Callum Ilott from the off, while front row man and race one winner Lando Norris made a shocking start and dropped down to eighth place.

Heading to Brooklands for the first time Ilott covered the inside line, prompting Eriksson to sweep straight round the outside of him and into the lead.

He instantly pulled away, ending the first lap almost two seconds ahead, and was never seriously challenged despite Ilott reducing the lead down to half a second in the middle of the race.

F3 rookie Jake Hughes moved up to third at the start from fifth, and after opening a gap to Maximilian Gunther had a very lonely run to the?podium.

Gunther spent the majority of the race defending from F3 returnee Jake Dennis. Approaching the end of the race they went side by side all the way from The Loop to Copse, with Dennis looking like he had finally found a way past before running wide on the exit of Copse.

Sixth place went to Mick Schumacher after fending off the attacks of Norris and Guan Yu Zhou.

Norris spent most of the first half of the race stuck behind Joey Mawson, whose defensive work was eventually worn down with a move on the outside at Brooklands.

Once in fresh air he hunted down Schumacher, but found the young German difficult to pass, allowing Zhou and Jehan Daruvala to close in and overtake him.

Norris?s ninth place means he drops down the championship order, with Eriksson inheriting the top spot ahead of Jake Dennis.

Mawson dropped down the order too once being overtaken by Norris, and he lost out on the final point to VAR team-mate Harrison Newey.

Track limits offences littered the lower half of the grid, with several drive-through penalties handed out to drivers in the offense.