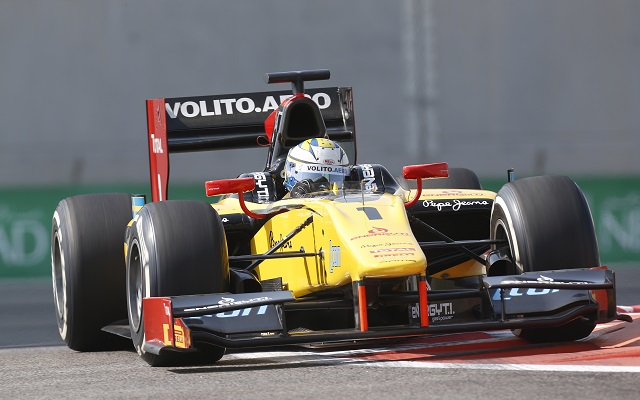 DAMS driver Marcus Ericsson has briefly overshadowed the title fight by taking his third pole position of the GP2 season in the Yas Marina finale.

Following a interruption in the session with six minutes to go, Ericsson prospered under pressure and managed to come from behind to take first on the grid.

Caterham Racing’s Alexander Rossi was in the hunt for pole for most of the session and eventually ended up securing his season-best qualifying result in second, just 0.007s behind Ericsson’s benchmark.

Championship contender Sam Bird took third, while his main rival and series leader Fabio Leimer was fifth. Carlin’s Jolyon Palmer ended up between them in fourth, having been the pacesetter for much of the session, but failing to the most out of his lap in the final stint.

Stefano Coletti and James Calado, who completed the top five list of mathematical title contenders, qualified outside of the top ten. Coletti still sits 44 points off Leimer and retains mathematical, if completely improbable chances. Calado, having received a five-place grid drop for an on-track squabble with Dillmann in practice, is officially out of contention.

The red flag that interrupted the session with six minutes to go was brought out by Daniel Abt, whose ended up losing a badly-attached wheel on his outlap.