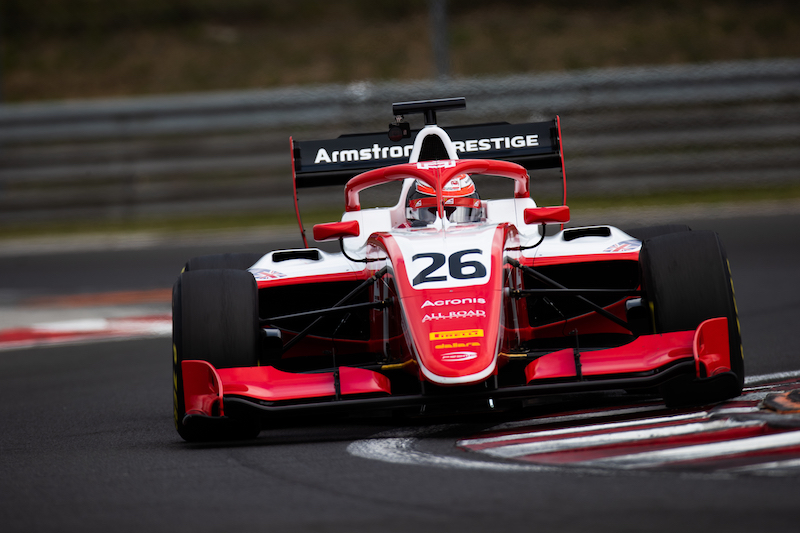 Marcus Armstrong moved back to the top of the FIA Formula 3 timesheets on the first day of the final pre-season test at the Hungaroring, outpacing Leonardo Pulcini.

Hitech driver Pulcini, who was fastest on both days at Barcelona last week, led the way once more in the morning session with a time of 1m31.564s.

Prema-run Ferrari junior Armstrong was the only driver to go quicker than that during the afternoon, setting a 1m31.411s in the closing stages.

His team-mate Robert Shwartzman was second fastest in the morning and third overall, 0.169s behind Pulcini, but stopped with a car issue with half an hour remaining in the afternoon.

Niko Kari was fourth for Trident with his morning time, ahead of the other Prema driver Jehan Daruvala, who battled Armstrong for top spot following Shwartzman’s issue.

Juri Vips was the sixth and final driver to get under the 1m32s mark with fourth place in the morning session.

Sauber Junior Team driver Raoul Hyman had followed him in fifth ahead of Artem Petrov, Richard Verschoor and Sebastian Fernandez, with Armstrong and Jake Hughes rounding out the top 10.

In the afternoon, Pulcini was third in front of Liam Lawson, Yifei Ye and Fernandez.