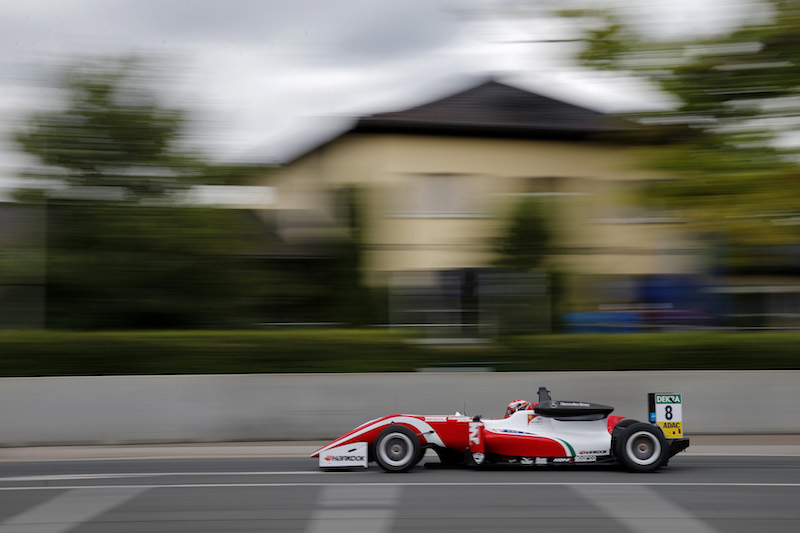 The Prema driver made a good start which helped him to be clear of a multi-car fight for second at the first hairpin.

Coming from sixth on the grid, Nikita Troitskiy charged down the inside of four other cars under braking, who were fortunate not to be collected by the SMP-backed Carlin driver as he ran deep.

This gave Armstrong a 1.5-second margin over team-mate Ralf Aron, but that was eliminated by a safety car after Sacha Fenestraz crashed at the Dutzendteich hairpin at the end of the lap.

The Renault junior had been side-by-side with Jehan Daruvala and Robert Shwartzman over fourth coming into the corner, and as he tried to cut back to the inside for a better run onto the pit straight he clashed with a locked-up Jonathan Aberdein, sending him up onto two wheels and into the barrier.

Once the race restarted it, Armstrong was able to pull away once more, leading by as much as 3.6 seconds at one point and finishing up 2.9s clear.

Daruvala had been promoted to a front-row start by a grid penalty for Dan Ticktum (for missing a red light at pit exit in practice), but wasted that with a slow getaway.

The Force India protege was able to recover back up onto the podium with a pass on Ticktum two laps after the restart and then put Aron under pressure in the closing stages, finishing just 0.3s behind.

Once passed, Ticktum had a quiet run to fourth in front of battling Prema drivers Mick Schumacher and Shwartzman.

Shwartzman had got up from ninth to fifth on the first lap, helped by cutting inside of the Grundig hairpin at the start – something for which he was later investigated but not sanctioned for.

After the restart he was was passed by Schumacher, who was one of several placed under investigation regarding the full course yellow procedure, but with no action taken.

Juri Vips and Marino Sato, who finished seventh and eighth, were also investigation for the same reason, as was their Motopark team-mate Fabio Scherer, who was running ahead of them until he served a drive-through for a jump start.

That in turn came just after another of Timo Rumpfkeil’s drivers had dropped out of seventh, with Aberdein spinning out at Dutzendteich.

Championship leader Enaam Ahmed was on course to score from 14th on the grid, having made it up to ninth, when he spun under braking for Grundig, perhaps trying to avoid running into the back of Sato.

He rejoined in 18th and finished 14th, and is now eight points ahead of Ticktum.

Guan Yu Zhou benefited from Ahmed’s spin to take ninth, but falls to fifth in the standings behind Ticktum, Aron and Armstrong.

Alex Palou came from 20th on the grid to finish 10th on the road, but was later judged to have passed Keyvan Andres under the FCY. Stewards gave him a one-second penalty, enough to give Andres 10th and his first European F3 point.