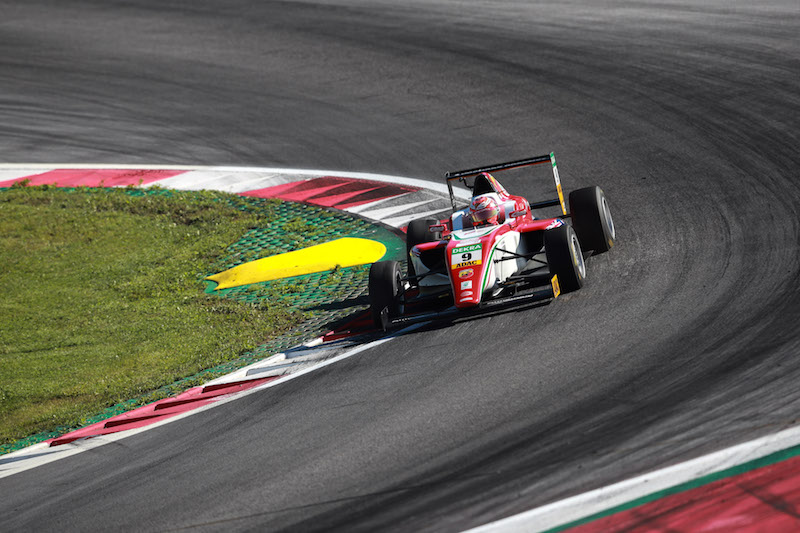 The Ferrari-backed New Zealander claimed pole position by more than a quarter of a second in an otherwise close qualifying session, and he kept the lead at the start before the race was red-flagged following a large pile-up at Schlossgold?triggered by Fabio Scherer being spun around by contact from Andreas Estner.

Once the race restarted, following two laps behind the safety car, there were 15 minutes remaining, and safety car returned not long afterwards once Tom Beckhauser had found the gravel at?Schlossgold.

There were seven minutes remaining after that restart and Prema’s Armstrong wasn’t challenged, winning by 1.7 seconds.

Michael Waldherr qualified and finished second for his best result in the series, even though his front wing was knocked out of joint when passed?by Jonathan Aberdein on the run to Turn 2 the first lap.

The Neuhauser Racing driver?was able to take up second place again at the first restart with a fresh front wing and kept hold of the?position when racing resumed, as Juan Manuel Correa got past Aberdein behind him.

Aberdein edged back in front exiting Schlossgold but the pair then tangled, with Aberdein’s Motopark car being turned across the front of Correa’s Prema entry with both sent on a bumpy ride into the grass on the left-hand side. They were able to rejoin down the order.

Felipe Drugovich briefly inherited third onto to slow and pit, with Juri Vips gaining the place?ahead of Kami Laliberte and Nicklas Nielsen.

Nielsen was able to pass both Laliberte and then Vips within two corners at the restart, with the US Racing driver snatching the final podium place when Vips locked up and went deep at Schlossgold.

The grid has been boosted in Austria by five leading contenders from Italian F4, and?the series leader Lorenzo Colombo was the first of these?home in sixth for BhaiTech.

Race-winners Lirim Zendeli and Kim-Luis Schramm – starting out of place on the ninth row of the grid – collided in the first-lap scramble after Zendeli tripped over Louis Gachot ahead, removing their rear and front wings respectively and forcing both to drive through?the gravel trap.

They came back through the order however to complete the top-eight finishers in front of Kush Maini and David Malukas.