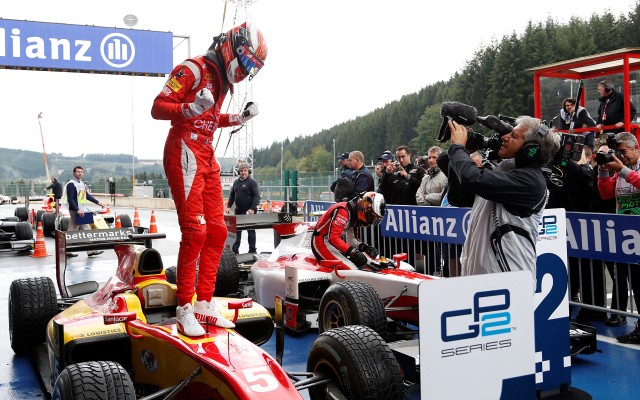 Raffaele Marciello claimed his first win in GP2 after defeating Stoffel Vandoorne in an epic battle in a wet feature race at Spa-Francorchamps.

The race was red-flagged on lap three after a huge downpour hit the circuit, making it undriveable. After it restarted behind the safety car, Vandoorne was passed at La Source by Johnny Cecotto. The Venezuelan then ran deep at Les Combes, but managed to retain the lead.

Although he lost time by running off the track, Cecotto was asked by the Trident team on the radio to give up the lead to Vandoorne.

Marciello would go on to pass Cecotto into Les Combes on lap 10, by which point local star Vandoorne had built a lead of over four seconds. That gap stayed around that figure for most of the race, as the pair pulled away from the rest of the field.

Inside the final ten laps, McLaren junior Vandoorne was the first of the duo to make his mandatory pitstop. Ferrari protege Marciello meanwhile stayed out for another couple of laps, and once he made his stop, he rejoined much closer to Vandoorne. His race could have ended there though, had he not survived a massive sideways moment over the crest at Raidillon.

With five laps left, Vandoorne led by 2.6 seconds but Marciello was closing fast, and the Italian caught right up when the Belgian ran deep at the final chicane. Vandoorne defended superbly for more than a lap, but Marciello got a faster exit from Malmedy, slid down the inside at Rivage and managed to take the lead, despite running wide.

Vandoorne would have no response over the remaining two and a half laps, as Marciello took victory by two seconds.

Despite his usual style making him look ragged – including running wide out of Blanchimont for the final time – Cecotto was fairly comfortable in third place, but finished 35 seconds behind Marciello.

Felipe Nasr fought back from qualifying down in 11th place to get up into seventh on the opening lap, partly thanks to an aggressive move on his slow-starting title rival Jolyon Palmer at Rivage. That became fifth at the restart after Mitch Evans (second) and Julian Leal (sixth) both slowed under the safety car on lap two, their cars seemingly going into safety mode in the low temperatures – although they would be able to take the restart sixth and 14th respectively due to their positions at the end of lap two.

Nasr would clear Nathanael Berthon after the restart with another bold move into the final chicane that gave the Frenchman little choice but to concede. That put him into fourth, which is where he would finish.

Berthon would be shuffled down the order after contact with Simon Trummer and a subsequent penalty.?Evans would benefit from that to move into fifth – a position he would lose to Palmer after the Briton’s slightly earlier stop, but which Evans would then regain before the end. Palmer kept up his 100 per cent points record this season with sixth, just ahead of?Artem Markelov, who impressed with his aggressive charge up the order to his first GP2 points – including a fantastic move around the outside of Tom Dillmann at Malmedy.

Daniel Abt stole eighth and reverse grid pole from Andre Negrao at the final chicane for the penultimate time, with Negrao scoring his first points in the series in ninth and Daniel De Jong getting his first point of the year in tenth. The Dutchman was one of three to take the original start on slicks despite the forecasted rain, and then switch to wets before the red flag. He would then go on to make a second, mandatory, stop.