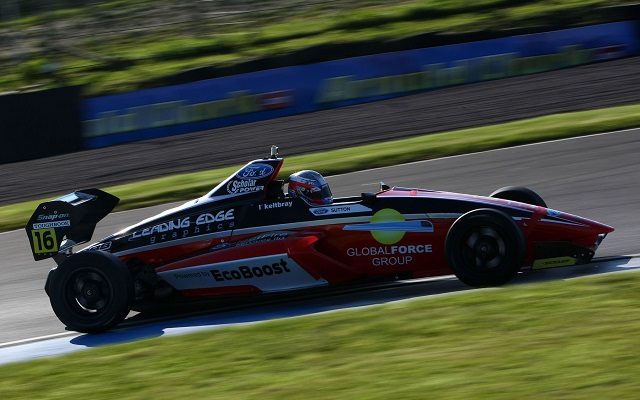 MBM Motorsport’s Ashley Sutton will start the first and the third races of the Formula Ford GB round at Knockhill from pole position after outclassing his rivals in qualifying.

Sutton, who is currently on a two-race winning streak, led most of the qualifying session and comfortably ensured he’d be getting double pole by being the only driver to lap below 48.7s – and doing so three times.

Champinship contender Jayde Kruger was closest to Sutton, finishing just 0.15s adrift while also managing a tenth up on his rival and points leader Harrison Scott.

None of the other drivers in the field managed to go quicker than 49s, with Kruger’s teammate Max Marshall leading Ricky Collard as best of the rest.

Radical teammates James Abbott and Juan Angel Rosso were sixth and seventh respectively, while Louise Richardson took eighth despite a spin that ended the session early with a red flag. Chris Mealin and Greg Holloway completed the order.

With Sutton almost two tenths clear on second-fastest times, Kruger was again ahead of Scott for second, while Marshall and Collard rounded out the top five. Richardson went two places better in sixth, leading Rosso, Abbott, Mealin and Holloway.