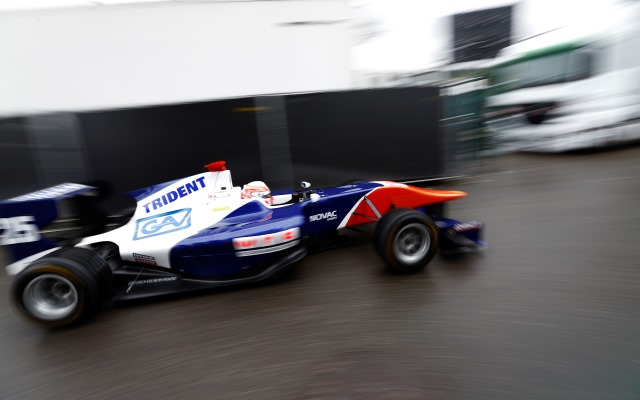 Luca Ghiotto scored an unexpected pole position for his first ever race in GP3 by topping a wet qualifying session at Spa-Francorchamps.

Jimmy Eriksson headed the times from championship leader Alex Lynn in the middle of the session, as the majority of the field took to the pits to fit new wet tyres.

Ghiotto, one of three series debutants that the Trident team drafted in for this weekend, was the first man to get back up to speed and he cleared Eriksson’s benchmark by 0.427 seconds with around three minutes left on the clock.

At that point, the timing screens were filled with personal best sectors, suggesting that conditions were improving and that Ghiotto’s time at the top would not last.

But few managed to actually find any significant improvement in their lap times, and nobody would be able to topple Formula Renault 3.5 regular Ghiotto.

Emil Bernstoff came closest and got up to second, but was a third of a second away from pole. That relegated Eriksson down to third, while Richie Stanaway moved up to fourth and one spot ahead of title rival Lynn.

Early pacesetter Patrick Kujala wound up sixth ahead of Marvin Kirchhofer, who along with his ART team-mates Dino Zamparelli and Alex Fontana gambled on slicks late on, but conditions were far from good enough for that and all three would end up switching back to wet rubber before the end.

Patric Niederhauser made a late improvement to take eighth ahead of Matheo Tuscher, with Zamparelli completing the top ten.

Another of Trident’s newcomers Konstantin Tereshchenko has been ruled out of the weekend as a precaution following his aerial crash in practice, while Carmen Jorda failed to set a time after sliding off into the gravel at Paul Frere corner on her out lap at the start of the session.

Lappalainen secures win in 1.6 Nordic race one at Ring Knutstorp