Lappalainen secures win in 1.6 Nordic race one at Ring Knutstorp 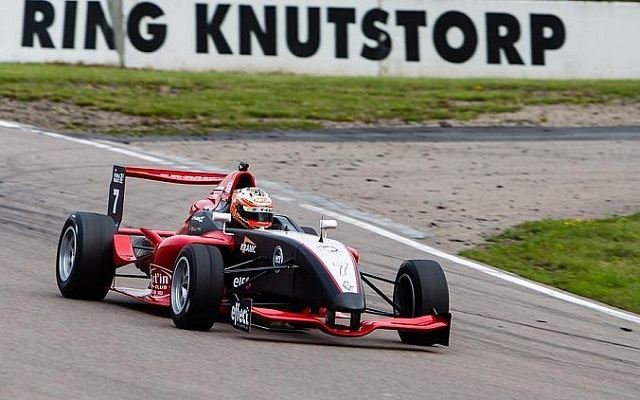 Formula Renault 1.6 Nordic championship leader Joonas Lappalainen recorded his fourth victory of the season in race one of round five at Knutstorp.

The Finn started the race from pole and led the full 18 laps of the race on his way to taking the checkered flag.

It was far from an easy drive for Lappalainen, though, as, on a drying track, Norwegian Kevin Aabol ended up mounting the biggest challenge to the Finn’s victory aspirations.

Aabol assumed third in the early laps of the race and then overtook front row starter Robert Svensson for second place on lap seven.

He then set out after Lappalainen in the second half of the event, gradually lowering the gap to the race leader and eventually finishing just 0.4s behind him.

Svensson, who claimed his first win in the category in the previous 1.6 Nordic race at Parnu, completed the podium this time around, narrowly holding off Lukas Sundahl.

Ilmari Korpivaara had a lonely race on his way to fifth, while Robin Fredriksson and Rasmus Ericsson fought past Karl Ero to claim sixth and seventh respectively.

Paul Blomqvist and Pontus Fredricsson, who had made up row two on the grid, retired over the opening laps.