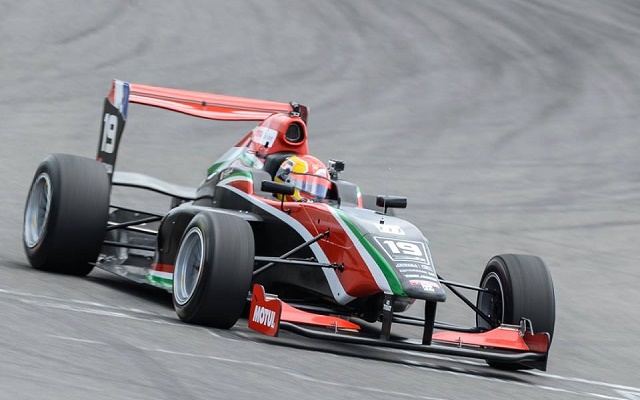 M2 Competition’s Brandon Maisano bagged his third victory of the Toyota Racing Series in race two at Taupo and moved up to runner-up in the standings.

The Frenchman was originally set to start the race in seventh, but moved up to reverse-grid pole after teammate Arjun Maini was stripped of race one victory.

Maisano made the most of the opportunity, leading every lap from the line to take the checkered flag.

ETEC’s Thomas Randle looked dangerous in Maisano’s mirrors early on but eventually faded as the race settled into a rhythm. As Santino Ferrucci ran in a lonely third, the prospective finishers were five seconds up the road from the rest coming into the final stint.

However, the race was then shaken up by a crash between squadmates Artem Markelov and James Munro in the fight for seventh, which ended up with the Russian upside-down and the red flag waved.

It was a while until the restart, which saw Maisano lead the pack once again. The Frenchman was nonplussed at losing his built-up advantage and had little trouble controlling the three remaining green-flag laps to record the win.

Ferrucci picked off Randle at the final lap to claim second, with the Aussie settling for his first podium since the Ruapuna opener.

Championship leader Lance Stroll stayed out of trouble to claim fourth, ahead of Stefan Riener and Sam MacLeod.

Mathias Kristensen was seventh, Damon Leitch finished as the top local in eighth, with Charlie Eastwood and Nikita Mazepin making up the top ten.

Maini, who was Stroll’s main rival coming into the race despite the penalty earlier today, managed a sterling drive from 12th on the grid to be seventh at the final lap, only to be shuffled down to 14th at the checkered flag.

As such, the Indian is now down to fourth in the standings, passed by Maisano and Ferrucci.

The Frenchman is now closest to his long-time teammate Stroll, trailing him by 80 points with five races to go.