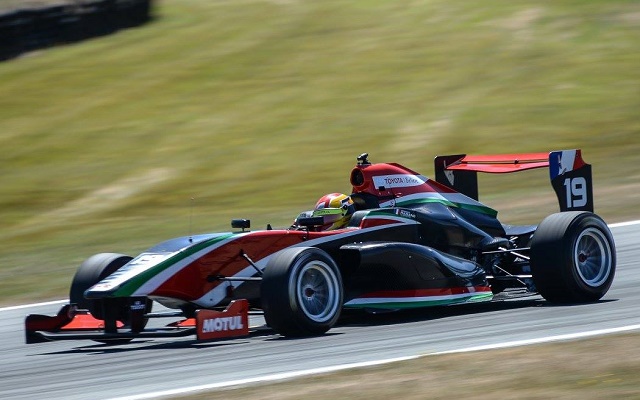 M2 Competition’s Brandon Maisano established himself as the most proficient qualifier of the 2015 Toyota Racing Series field with a third pole of the season at Taupo.

The Frenchman will be joined on front row by long-time teammate Lance Stroll, who currently heads the standings by 80 points over Maisano.

At halfway point in the session, the pole position seemed a toss-up between Maisano, Stroll, Callum Ilott and Damon Leitch, but the Frenchman’s top effort with four minutes to go proved unassailable.

Behind the championship duo, car rookie Ilott managed another impressive showing around Taupo as he claimed third, just 0.01s behind Stroll and the same amount ahead of Giles Motorsport’s Sam MacLeod.

TRS debutant Sergio Sette Camara continued to make a good first impression with another top-ten on the grid, qualifying in fifth.

Arjun Maini, whose title hopes were dealt a serious blow by yesterday’s race one penalty, had a low-key session but moved up to sixth a full minute after the checkered flag.

Damon Leitch was shuffled down to seventh, while Mathias Kristensen, Charlie Eastwood and title hopeful Santino Ferrucci bunched up to conclude the top ten.

The grid for the 20-lap Denny Hulme Memorial Trophy will be made up from combining the best laps from the two qualifying sessions.

As such, the top six will be carried over straight from the race one grid, while Maisano’s race two pole only bumps him up to seventh.