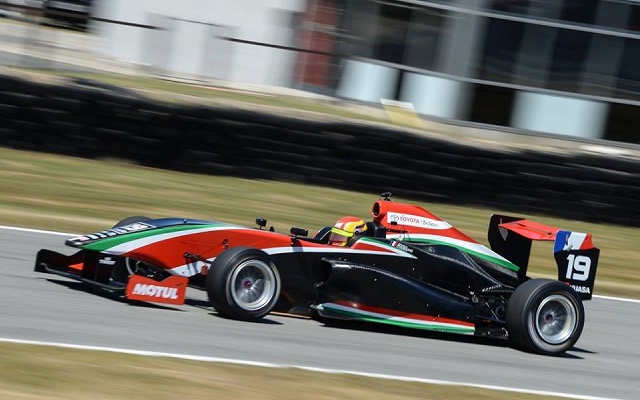 The Frenchman’s controlled drive to the checkered flag saw him solidified as the biggest challenger to Lance Stroll, who finished second, minimizing the damage to his points lead.

The M2 drivers started the race as first and second and at no point in the race would their respective positions be in danger.

Maisano established an early lead over Stroll, who himself was safely ahead of third-placed Sam MacLeod.

A lap-nine safety car for Alfonso Celis‘ trip to the gravel was the biggest chance for change out front but proved a false dawn as the top three finished in their respective positions.

Further down the road, though, there was a fair amount of intrigue. Having been overtaken by championship hopeful Arjun Maini, who in the end finished a comfortable fourth, newcomer Sergio Sette Camara came under pressure from Artem Markelov after the restart.

On the final lap, the duo tangled, with Sette Camara recovering to 12th, Markelov stranded and locals Damon Leitch and James Munro moving up to fifth and sixth.

Callum Ilott of ETEC would’ve had high hopes coming into the race, having qualified in third after showing sublime speed all weekend. However, it became abundantly clear that this wouldn’t be the Briton’s day early on, as he fell behind MacLeod at the start and then lost ground lap after lap.

He eventually ended up outside of the top ten and with a broken front wing.

In the standings, Stroll now leads Maisano by only 72 points, with 75 up for grabs in a single race. Ferrucci and Maini continue to feature in the title picture as well, 124 and 130 adrift respectively.