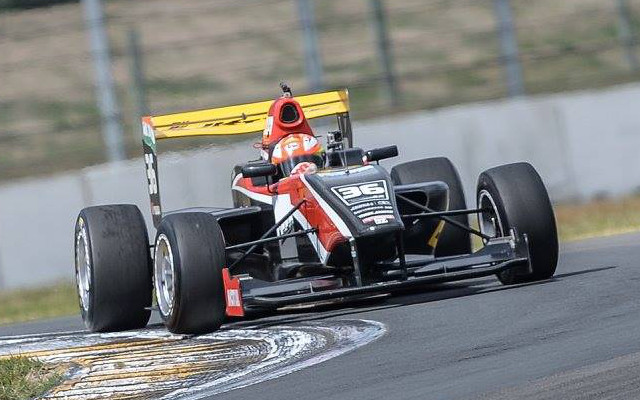 Arjun Maini kept himself in contention for the Toyota Racing Series title by claiming what should be his second win of the campaign in the last of the four races at Taupo.

As in the first race of the weekend, the Indian remained out front in an action-packed race, but this time he will hope to keep hold of the victory after losing his Saturday win to a jump start penalty.

The race was red-flagged on lap one after Brandon Maisano – a double winner this weekend – rolled out, but the Frenchman was reported to be okay.

After the restart, the leading stayed tightly bunched until the chequered flag, but Maini was never headed.

Fellow BRDC F4 graduate Charlie Eastwood was his nearest challenger for much of the race, but he would succumb to a charging Artem Markelov.

The GP2 racer had started sixth, but made up three places within a few laps of the restart before going on to pass Eastwood and finishing within three tenths of Maini. Eastwood was also inside of a second as he clinched his first podium since the opening round.

Karting graduate Callum Ilott continued his impressive pace this weekend, running fourth and holding the fastest lap before dropping towards the back.

Up into fourth in his place came James Munro, with the Kiwi making great progress from tenth at the restart. Sam MacLeod completed the leading pack in fifth place, three seconds behind the winner.

Series debutant Sergio Sette Camara was running sixth ahead of a charging Stefan Riener until both spun out with three laps remaining.

With Maisano out and Santino Ferrucci also in trouble, spending time in the pits and finishing three laps down in 16th, Stroll’s points advantage actually increases to 85 points, with Maini now his closest challenger again. With 225 points available from the final three races, Maisano and Ferrucci are also now 102 and 134 adrift respectively.

The safety car had been needed for a second time when Matteo Ferrer crashed out on lap six.