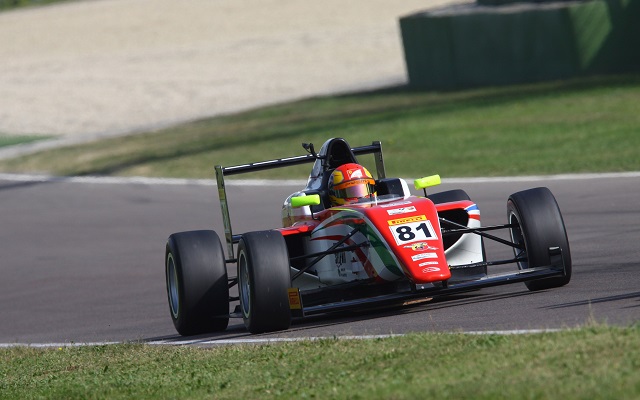 A dominant display by Prema driver Brandon Maisano saw him clinch pole for races one and three in the final weekend of the 2014 Italian F4 season at Imola.

The 21-year-old Frenchman was rarely troubled in either session, and in each occasion had large gaps to the driver behind.

Andrea Russo, one of the contenders for second place in the championship, was over three-tenths off Maisano’s pace in the first session in 2nd.

Another contender for second, Mattia Drudi, qualified in third place ahead of Euronova’s Sennan Fielding.

Antonelli’s Joao Vieira and SMP-backed Russian driver Ivan Matveev will share row three of the grid for race one. Behind them, Euronova’s Andrea Fontana and F & M driver Mahaveer Raghunathan made up the fourth row.

Maisano’s pole margin in the second session was even greater, over half-a-second ahead of Drudi.

Fielding improved right at the end to take third on the grid ahead of Leonardo Pulcini and Matveev. Russo’s failure to improve on his final two timed runs meant he was shuffled down to sixth.

Vieira could only manage seventh on the grid after spinning into the gravel, an incident which resulted in the session being red-flagged at the halfway point. He will share the fourth row of the grid with Fontana. Raghunathan and Desideri locked out row five for race three.