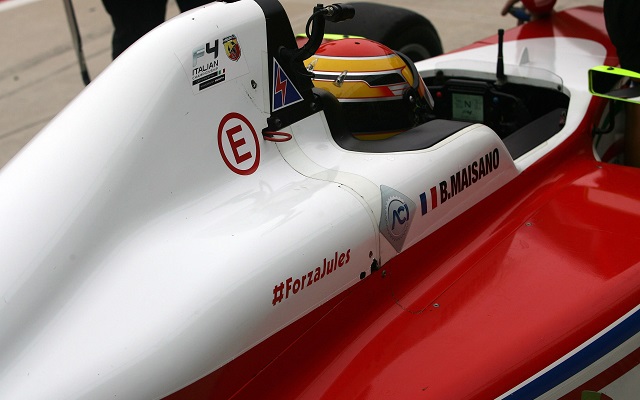 Prema Powerteam driver Brandon Maisano went fastest in both Friday practice sessions of the final round of the 2014 Italian F4 season at Imola by a considerable margin.

The 21-year-old Frenchman, who has clinched the Trophy Class title for drivers born before 1996, was over half a second quicker than Mattia Drudi?in practice one and three tenths faster than the Italian in the second session.

DAV driver Leonardo Pulcini was third fastest in the morning, nine-thousandths of a second behind Drudi. SMP-backed Russian driver Ivan Matveev was fourth, ahead of Drudi’s teammate Mahaveer Raghunathan.

In the second session, Raghunathan was an impressive third fastest ahead of Pulcini and Antonelli driver Joao Vieira. Matveev was sixth quickest, with Fielding, Russo, Fontana and Valente completing the top ten once again.

Series champion Lance Stroll was absent from proceedings in free practice, although the Ferrari junior is registered in the official entry list for this weekend.