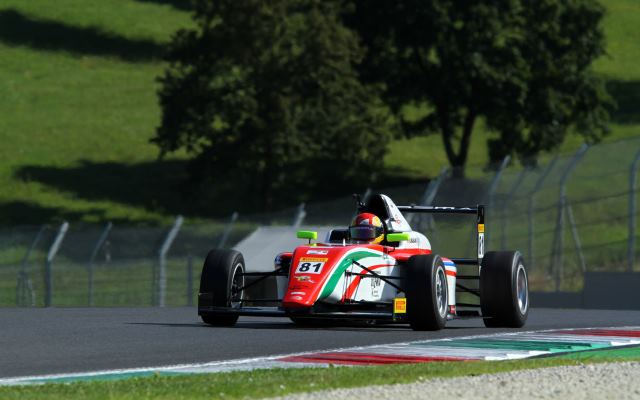 Brandon Maisano collected his second victory of the Italian F4 weekend at Mugello after an impressive performance from the Prema Powerteam driver in race three.

Although he was supposed to start from pole position, he triggered a second formation lap and was therefore was forced to start from the back of the grid. As a result, Lance Stroll inherited the first position, however, Andrea Russo took the lead after an impressive getaway despite Stroll forcing him off the track.

After two laps, Stroll reclaimed the lead only to receive a drive-through penalty for his overly-aggressive start.

It was going to be Russo’s race, however, Maisano made a great recovery during the race, passing every single driver and finding himself in second in the final stages of the race.

In the penultimate lap he overtook Russo as well to celebrate his second victory of the season, with Russo and Jenzer’s Alain Valente completing the podium.

The race ended with a huge accident between Mattia Drudi and Takashi Kasai, who were fighting for fourth until Kasai forced his rival off track, putting both drivers out with Drudi going airborne.

Brazilian Joao Vieira inherited fourth while Stroll narrowly missed out on fifth after rejoining eleventh from his penalty, missing out to Andrea Fontana by just 12 thousandths of a second.