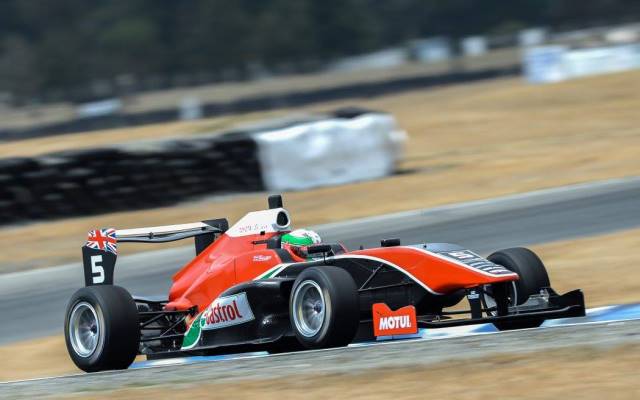 Likely European F3 campaigners Brandon Maisano and Sam MacLeod shared the spoils in qualifying for the opening round of the Toyota Racing Series at Ruapuna.

Maisano triumphed in a three-way fight for top spot in the first of the two 15-minute sessions, defeating his companion Lance Stroll and GP2 racer Artem Markelov.

Maisano overturned a 0.016-second deficit to Markelov with a minute left of the opening bout to claim pole for Saturday afternoon’s race.

Markelov was stung with a five-place grid penalty for abusing track limits, promoting Stroll onto the front row alongside his Prema and M2 Competition team-mate. The 16-year-old Canadian had only been six hundredths off the pace.

Best of the rest was MacLeod in fourth. He, Stefan Riener, Thomas Randle and Damon Leitch are all set to gain a place from Markelov’s penalty.

Testing frontrunner Arjun Maini had to make do with eighth ahead of his fellow BRDC F4 graduate, with John Simonyan completing the top ten.

In the second session, Stroll led the times at first but MacLeod stole top spot away from him and ifnished up with a 0.061s advantage.

Markelov got up to third with his final effort ahead of Austrian FR2.0 regular Riener. Maisano was a more muted fifth, followed by Eastwood and Randle. Local ace James Munro was eighth after coming 13th in the opening session, while Maini and Santino Ferrucci claimed places on the fifth row.