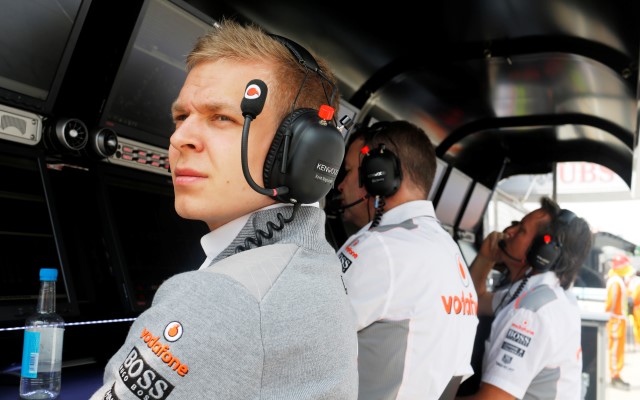 Formula Renault 3.5 title contender Kevin Magnussen will make his second testing appearance for McLaren on the first day of the young driver test at Silverstone on Wednesday.

After impressing the team during his debut at the same event last November in Abu Dhabi, the Dane will commence the Woking outfit’s running this week.

While Magnussen then travels out to this weekend’s FR3.5 round in Spielberg, the team’s more experienced testers Oliver Turvey and Gary Paffett will take over for the remaining two days. The team have opted not to use either of their race drivers, despite a rule break permitting them to do so for the purpose of tyre testing.

On a day that the driver placed eighth in the FR3.5 standings is linked to an F1 race seat for 2014, it will no doubt frustrate many that championship leader Vandoorne hasn’t been given a chance this week by McLaren. There’s no denying that the Belgian deserves such an opportunity soon, but it’s understandable that hasn’t come this week.

With the young driver test coming mid-season this year, McLaren must take advantage of the track time to try and solve some of the issues they’ve suffered with their 2013 car. Paffett, Turvey and Magnussen all have F1 experience, drove last year’s McLaren when it was on top-form in Abu Dhabi, and are understood to have been sharing the bulk of the simulator work as well as the official role of reserve at each of this year’s Grands Prix. Vandoorne meanwhile is relatively new to the McLaren fold and has much less experience of being involved with the F1 team.

Furthermore, with practice for this weekend’s FR3.5 round in Austria taking place on Friday, McLaren would have had limited time in which they could have run both Magnussen and Vandoorne.

Had the young driver test been where it ought to be – after the end of the junior seasons – then McLaren would have been able to give Vandoorne a test without much problem. He would have been available, and the test would have been less crucial to the team for car development.

Even if he’ll have to wait for his F1 debut, the future is bright for Vandoorne after signing with Jenson Button’s management company.