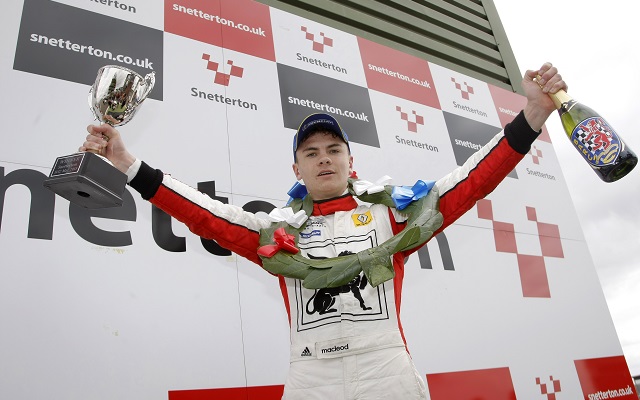 Scottish driver Sam MacLeod has signed a deal with Van Amersfoort Racing to race in the 2014 German F3 season.

MacLeod’s name showed up on Van Amersfoort Racing’s website a few weeks ago and his participation was soon confirmed by Autosport, who have also found out that he’ll do a British F3 campaign with Fortec.

The 19-year-old Scotsman MacLeod enjoyed a solid karting career, which included a fourth place in the CIK-FIA KF2 European Championship, before making his full-time debut in cars in Protyre Formula Renault last year.

Having collected a victory, five podiums and overall sixth in the standings, MacLeod enjoyed a solid rookie season, which was somewhat undercut by a rather disproportionately large number of incidents.

Instead of staying in the series for a title assault, MacLeod will be switching to German F3, where he will continue collaborating with Caterham-backed Weiron Tan, who is set to be his teammate for a second year in a row.

The British F3 calendar clashes with ATS Formel-3-Cup 2014 on two occasions. On those dates, MacLeod will focus on his German programme according to Autosport.His seat at Fortec could be taken over for those races by Protyre FR race winner Alex Gill, who will take over the seat for Tuesday’s test at Donington. Formula Ford driver Sam Brabham will also be present at that test, driving the second Carlin car alongside confirmed driver Peter Li Zhi Cong.

Van Amersfoort Racing has a rich history in the championship with four drivers’ titles, including Richie Stanaway’s triumph in 2011. Last year, the Dutch squad fielded Gustavo Menezes, who finished fourth to be the best non-Motopark driver of the series.