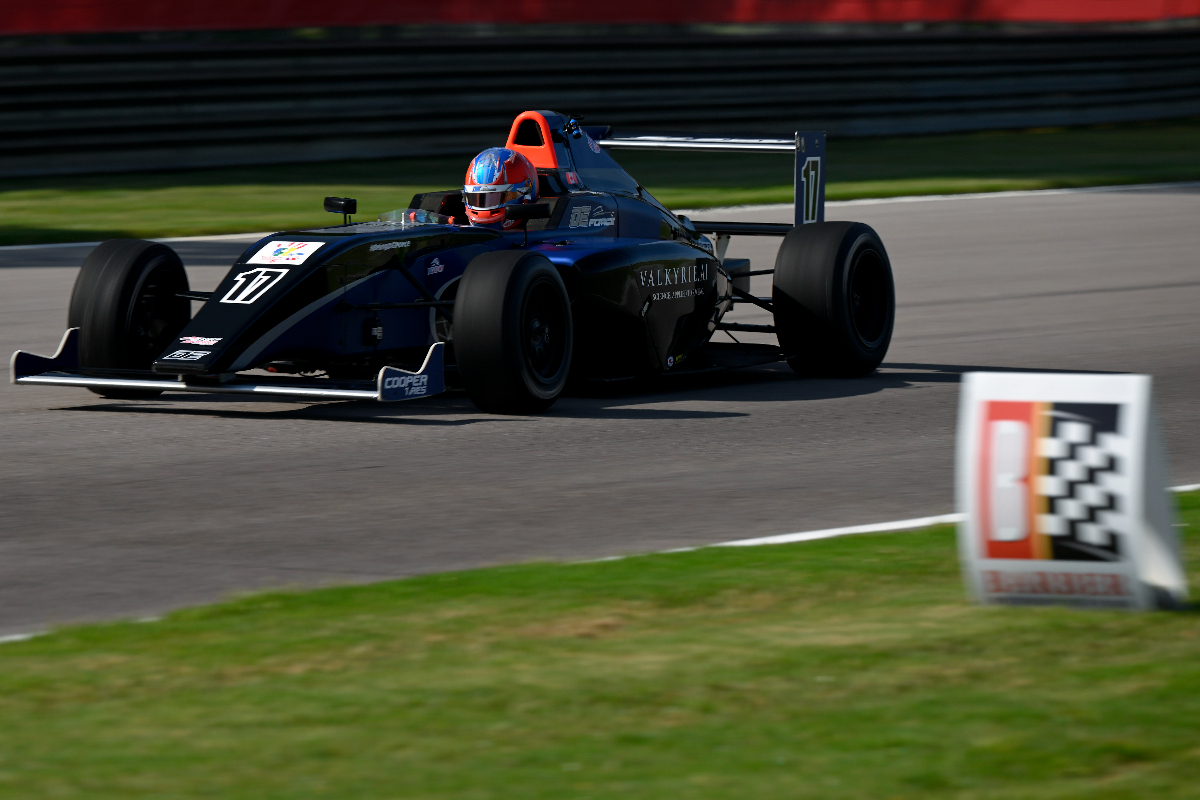 Mac Clark made it four wins out of four in the Road to Indy’s new Formula 4 series USF Juniors as he did the double at Barber Motorsports Park.

Clark won both races in the series’ inaugural event at Ozarks International Raceway last week, and led lights-to-flag in race one in Barber. He was followed early on by Andre Castro who he had beaten to pole by 0.165 seconds.

Castro sat in second until lap seven of 20, when he fell to fourth at the exit of turn five and Sam Corry moved into second having passed Nikita Johnson shortly before for third.

Alessandro de Tullio and Jeremy Fairbairn ran fifth and sixth, and they closed in on the battling ahead. De Tullio passed Castro on lap nine, and on lap 12 the Velocity Racing Development drivers swapped places in second and third.

Fairbairn had cleared Castro and tried to pass de Tullio on lap 13, and his move also enabled Castro to regain a spot. De Tullio soon got back by, and he and Fairbairn went chasing the fight for second again.

On lap 17 there was a side-by-side moment as Fairbairn attacked Johnson, who had fallen back behind Corry. Johnson defended third place through two laps of constant pressure, and on the penultimate lap Fairbairn dropped to sixth with front wing damage.

That didn’t totally stop the pressure on Johnson, as he had de Tullio chasing on the final lap.

Clark took race two pole by 0.298s over Castro, and had his first getaways prevented by two aborted starts. The green flag eventually waved on lap three, and Clark led Castro away while Fairbairn passed Corry for fourth.

As the top two pulled away, Johnson came under pressure from Fairbairn for third and he was passed on the third lap of green flag action. He wasn’t to remain there too long, as Corry went on a recovery drive from sixth place.

He cleared DC Autosport with Cape Motorsports’ Ethan Ho for fifth, and passed team-mate Johnson on lap 15 of 20. There wasn’t enough time to catch Fairbairn, who finished third behind Clark and Castro.

Ho pressured Johnson for fifth but dropped to eighth in a late multi-car battle, with Nicholas d’Orlando leaping up to sixth and Noah Ping profiting claiming seventh.