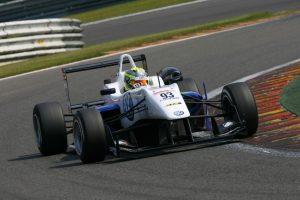 Ma-con Motorsport will make a surprise return to European Formula 3 this season after four years away, bringing ADAC Formula 4 race-winner Julian Hanses into the series.

The German squad last appeared in European F3 in 2013 when it ran now-Porsche factory racer Sven Muller for much of the year (his seat ultimately taken by Stefano Coletti at the final round).

The year before that it ran Anglo-Scandinavian aces Tom Blomqvist (pictured) and Emil Berstorff, who claimed four podiums between them.

Ma-con’s history also includes being a frontrunner in the final season of International Formula 3000 in 2004 with Tomas Enge, and taking Richie Stanaway to the ADAC Formel Masters title in 2010.

There is no news as of yet regarding which engines the team will use. It had a strong relationship with Volkswagen on its previous European F3 stint, but it later took on the still-born ORECA Renault engine project.

Hanses steps up to F3 having finished 11th in the standings in his second year in ADAC F4 in 2017 – although he was sat sixth on the eve of the final round before having the first of his two wins stripped after a failed appeal by US Racing against a technical infringement.

“It’s a great honour for me to get the chance to compete in one of the most famous junior racing series in the world,” said Hanses.

“I am aware that this will not be an easy task.?The competition is strong and numerous racetracks are new to me.”

The 20-year-old will be the 12th rookie on the European F3 grid, and the least experienced of the 19 drivers confirmed so far.

“I kept an eye on Julian’s performances last year and I am impressed with his way of working.

“We certainly start as an underdog, but I am very confident that we will provide surprises.?The whole team is highly motivated for this project.”