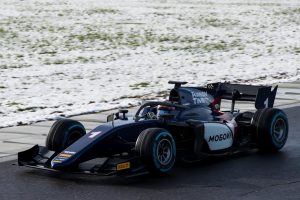 Formula 2’s new car, the Dallara F2 2018, was shaken down by teams at Magny-Cours in a snowy test topped by Campos Racing’s Luca Ghiotto.

The new 3.4-litre turbocharged V6-powered halo-shod car only made it into the hands of teams last month, around the same time as kit from last year’s Abu Dhabi season finale returned from being shipped by boat.

It is the first car in junior single-seaters to be fitted with the halo, with only the FIA ‘regional Formula 3’ concept also integrating the cockpit protection device as of yet.

The shakedown occurred at Magny-Cours, host of the French Grand Prix between 1991 and 2008, in near sub-zero conditions and with several millimetres of snow either side of the track. With melted snow still sat on the track surface, it meant most of the running was conducted using Pirelli’s wet tyres.

Force India reserve driver Nicholas Latifi and European F3 champion Lando Norris were the first to venture onto the track in the morning for DAMS and Carlin, and were followed by GP3 runner-up Jack Aitken of ART Grand Prix, and F2 racewinner Luca Ghiotto, who topped the afternoon session in both times and laps completed.

?The conditions were not ideal when we started today; it snowed yesterday, and this morning the track was slippery and the temperatures were cold,” said Ghiotto. 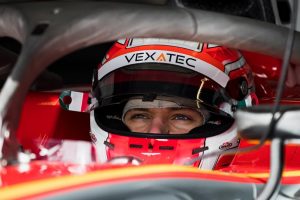 “This car is a clear step from the previous one; the grip is amazing. Generally, it?s an improvement on all areas. In a cold day like today, it performed really well. I couldn?t be happier with how things went for me.

?I was very surprised with the reliability. I saw all the other cars running all day long. The teams, Dallara, Mecachrome [engine supplier] and everyone should be happy with what has been achieved today – and it?s only day one!

?The turbo engine is getting us a step closer to F1. I can already say that the F2 2018 car is much closer to an F1 car than last year?s machine. If any of us had a chance to drive in F1, we would be able to adapt even faster.”

All 10 teams on the entry list were present, although Campos, DAMS, MP Motorsport and the returning Russian Time elected to only run one driver, and Prema encountered issues meaning only limited running was done between Nyck de Vries and Sean Gelael.

Long-time MP man Daniel de Jong did all the running for the Dutch team,?with 2017 F2 runner-up Artem Markelov doing the same for Russian Time, the team built around the 23-year-old Russian.

Trident ran Haas F1 juniors Santino Ferrucci and Arjun Maini, who are expected to be announced as its two drivers for 2018.