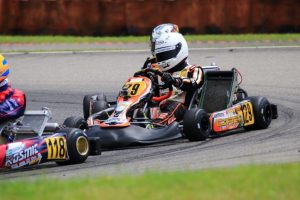 German karter Hill won the ROK Cup in his home country last year, and has contested the CIK-FIA and ROK world championships.

He has already taken part in several tests with Anders, and will make his car racing debut in the FR NEC season opener at Zandvoort.

?FR NEC is a very good series to start my single-seater career with,” said Hill.

“The Formula Renault car is a lot more aerodynamic than an F4 car and that?s good for my development in terms of set-up and experience.

“The 2 litre Renault engine is very reliable and I also like the design of the car. And last, but certainly not least, I admire the racing ? hard, but fair!

?Anders Motorsport is a young team with nice people I like to work with. Last year we did nine tests together which proved this.

“It?s [Anders’] first year in FR NEC too but I think we can achieve big things together and get a good position in the championship.”

Anders Motorsport is a continuation of the?G&J Motorsport team that previously raced in ADAC Formel Masters, and was due to make its series debut in the final round of last season with Andreas Estner, but withdrew before on-track proceedings took place. They are expected to announce a second driver for this season.

?Phil has demonstrated great ability and achieved much throughout his time in karting. He?s completed some testing with the team, worked well with our engineering setup and impressed everybody with his performance throughout,” said team boss Marvin Anders.