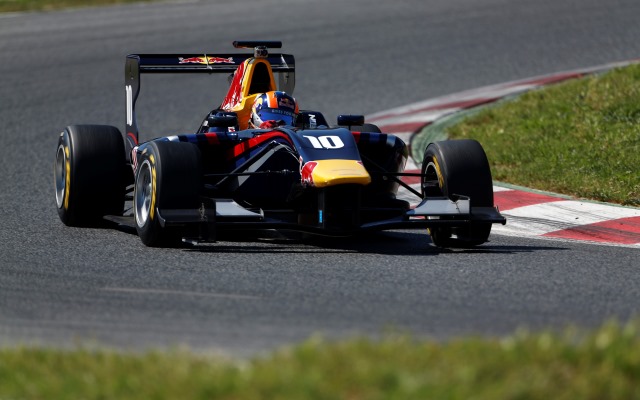 Red Bull Junior Alex Lynn posted the best time in the afternoon session on day one of the final GP3 pre-season test at Barcelona.

Lynn’s time of 1m35.663s was more than half a second adrift of Nick Yelloly‘s morning benchmark, and was the fourth quickest time of the day.

Dino Zamparelli, who switched from Marussia Manor to ART over the winter, moved up into P3 late on ahead of his former F2 competitor Matheo Tuscher. The Swiss teenager finished fourth in the afternoon on his first day back in a Jenzer GP3 car for two years.

Lynn’s Carlin team-mate Emil Bernstorff was fifth ahead of Arden’s Patric Niederhauser. The Swiss driver finished a session in the top ten for the first time during the 2014 pre-season, having ended four of the previous nine sessions in 11th place.

The session was ended early after Nelson Mason brought out the red flags with a few minutes left on the clock with his second off of the afternoon. Denis Nagulin also triggered an interruption earlier in the session.