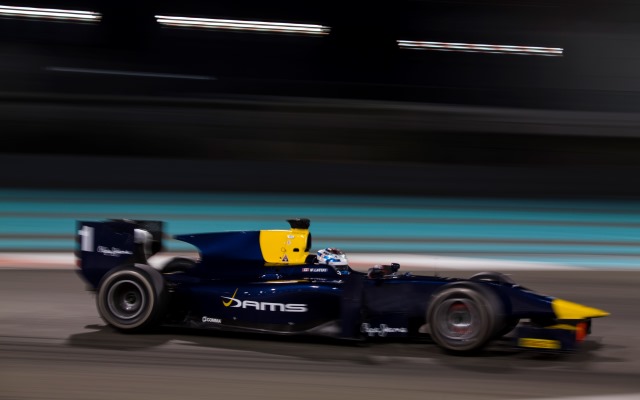 Alex Lynn will continue with DAMS for his second season in GP2 in 2016, with Nicholas Latifi replacing Pierre Gasly alongside him.

Lynn finished sixth in GP2 in 2015 after stepping up as GP3 champion, and won the Barcelona sprint race and Hungaroring feature.

Gasly ended up tied on points with Lynn after three pole positions from the final four events, but with a reported cut to his Red Bull backing for 2016, will not remain at DAMS and is instead linked to series newcomers Prema.

He’s replaced by Canadian driver Latifi, who ran all three days of the post-season test in Abu Dhabi with the team (pictured), topping the times in one session and coming second in three others.

He contested four GP2 rounds with MP Motorsport in 2015 with a best finish of 11th, while simultaneously racing in Formula Renault 3.5.

“I am very happy to continue with DAMS after sharing so many extraordinary moments – including my first GP2 win – in my rookie season,” said Lynn, who joined Williams as a development driver at the start of 2015.

“Thanks to the team I improved all aspects of driving in 2015, especially my ability to manage a race distance.

“I am now better prepared than ever before and ready to fight for victory at each event. The target is to win the championship.”

Latifi commented: “I am really excited to join DAMS for 2016. Our first test together in Abu Dhabi was very positive and led to us setting the fastest time of the week.

“I have no doubt that we’ll need to dig even deeper when the season starts, as everyone will be doing the same thing to get the upper hand.

“With the help of the team and its GP2 championship-winning experience, I am going to have the best environment possible to develop myself as a driver and fight at the front for good results.”

Jean-Paul Driot’s team is the first GP2 squad to announce drivers for the 2016 season.

“We continue with Alex, who consistently demonstrated his winning attitude and will be leading the squad next year,” said Driot.

“We are also delighted to welcome Nicholas, who showed his speed during the recent Abu Dhabi test by setting the fastest time overall and will certainly surprise a few people during the coming season.”