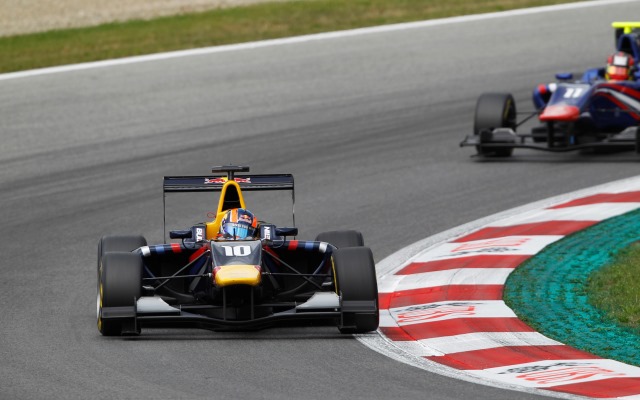 Alex Lynn claimed his second win from as many Saturday races in GP3 as he took a home victory for Red Bull in Austria.

Lynn made a great getaway from pole position to lead into turn one ahead of Carlin team-mate Emil Bernstorff, while the poor-starting Alex Fontana collided with the Marussia Manor car of Dean Stoneman, putting both out on the spot and triggering a safety car.

After the restart, Lynn and Bernstorff traded fastest laps but it was Lynn who won out, finishing up 2.7 seconds ahead.

Richie Stanaway took third at the start from eighth on the grid, but a sloppy restart saw him passed by Jimmy Eriksson, who held on for the rest of the race to repeat his Barcelona podium.

Once again the three most recent German F3 champions were largely inseparable, with Marvin Kirchhofer following Eriksson and Stanaway home.

Matheo Tuscher put in a storming drive from 14th on the grid, with the 17-year-old getting up to eighth on the opening lap and then at the restart passing Luis Sa Silva and Nick Yelloly, who will form the front row of the grid for race two after completing the top eight finishers.

Patrick Kujala made it home in ninth after being involved in the Fontana-Stoneman contact, while Patric Niederhauser held off Arden team-mate Jann Mardenborough to score the final point.