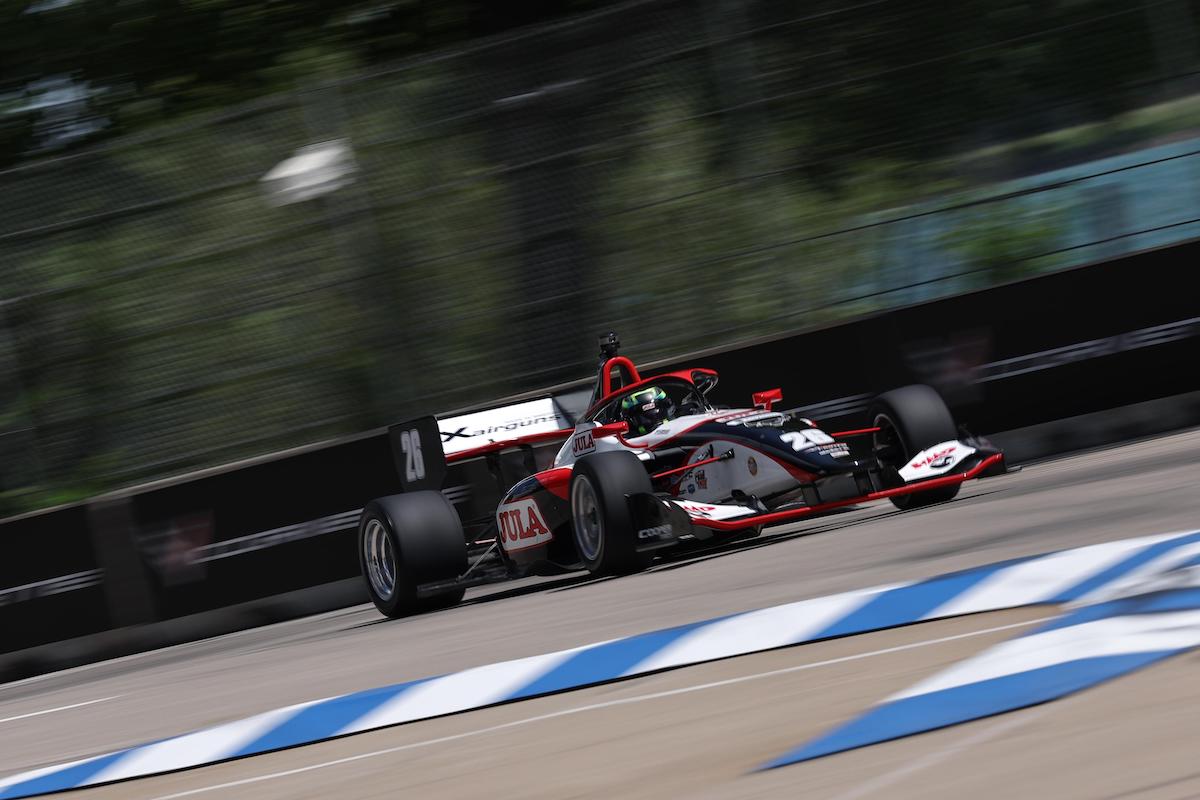 Linus Lundqvist dominated proceedings in Indy Lights qualifying on the streets of Detroit, claiming a pair of pole positions for the fourth and fifth races of the season.

Detroit offered a first look at a new qualifying format for the Indy Lights championship. The qualifying session was split into two smaller sessions, with each session setting the grid for one of the two races this weekend.

Track conditions greatly improved over the course of the two sessions. Lundqvist topped the times early in Q1 with a time in the 1m28s. By the end of the short session that had dropped to 1m23.119s.

Sting Ray Robb briefly topped the order and Christian Rasmussen shuffled Lundqvist back to third, but neither could match the championship leader’s rate of improvement.

Benjamin Pedersen would take second, 0.4947s off Lundqvist’s pace. Robb took third, while Rasmussen only managed a handful of laps. He was handed a penalty late in the session which forced him into the pits and brought an early end to Q1.

The second qualifying session would end early when Pedersen stopped on track at turn 12. He could not get going again and brought out the red flag with a little over two minutes on the clock. The session would not be resumed.

Lundqvist was already top of the order at this point. His time of 1m22.6778s was 0.4464s quicker than anybody else on the grid.

There were fewer mistakes in the second qualifying session and more drivers took turns at the top of the order, but traffic was more of a concern. Many drivers spent the entire session running nose-to-tail with one another. Matt Brabham, who was handed a drive through penalty early on, found himself out of sequence with the rest of the field and had some clean air, which briefly put him on provisional pole.

However, Lundqvist’s times late on were untouchable. He set multiple laps sub-1m23s, a benchmark nobody else was able to reach.

Brabham would finish second quickest ahead of Robb, McElrea and Rasmussen. Pedersen was sixth quickest when he brought out the chequered flag. Abel took seventh, ahead of Frost, Antonio Serravalle and Francis.