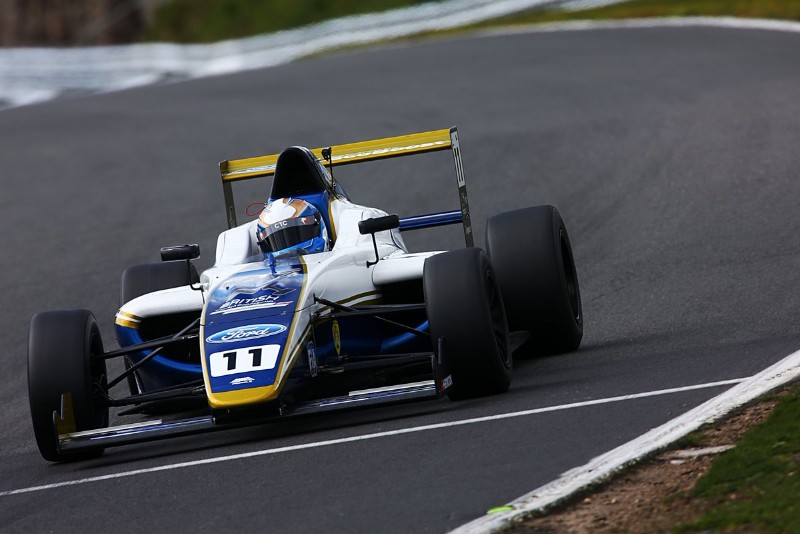 Richardson Racing marked its British Formula 4 return by winning the first race of the season from 10th on the grid with Ginetta Junior graduate Luke Browning.

Browning had an engine problem in qualifying, leaving him way down the order, but was up to fourth within a lap of the season opener.

Their lead was gap was quickly reduced, and a small mistake by Maloney allowed Browning to pull alongside down the pit straight. He ran side by side with him over the line before snatching the position.

Alvarez, one of only two drivers returning to the series this year, put up a good defence, but a move at Druids brought Browning the race lead.

From that point on he was unstoppable, putting in fastest laps as he pulled away up front and finishing the race 3.705 seconds clear of Alvarez. Victory came in the 16-year-old’s first race in single-seaters, and also marked Richardson Racing’s first race atop the podium having only got podium since the championship began in 2015.

Maloney was the top car racing rookie though in third, and like pole-sitting team-mate Joe Turney his race was compromised by a poor start. Turney, with the same amount of car racing experience and significantly less testing, dropped back over the course of the race and finished sixth behind Arden duo Tommy Foster and Bart Horsten.

Inexperienced Saudi Arabian racer Reema Juffali impressed in being just a second off the pace in qualifying, but a lengthy pitstop and lack of pace meant she finished her first British F4 race five laps down.